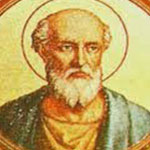 Evaristus was a Hellenized Jew, which refers to those were both Jewish and Christian. This group primarily lived in Jerusalem and spoke either Greek or Aramaic. He was born in Bethlehem and spent most of his life there before becoming the pope. Known as Euaristos for much of his life, he would later change his name to Evaristus.

When Pope Saint Clement I was martyred, it threw the Church into turmoil. Legend claims that the pope was tied to an anchor and tossed into the churning ocean when he drowned. A follower would travel to the ocean and search the shore until he found the pope’s body. Bishops quickly picked Evaristus to succeed Clement because they believed that he could bring the Church together and prevent the martyrdom of other Christians under Emperor Trajan. Many believe that John the Apostle died during the early days of the papacy of Pope Evaristus.

According to a biographer published centuries ago, Pope Evaristus wanted to give bishops and other leaders more control over their followers. To accomplish this task, he took the city of Rome and divided its districts that he called parishes. He then picked a priest to lead everyone in each parish. The pope would also nominate seven men to serve as deacons and work beneath the priest in every district.

Followers of the Christian Church at that time engaged in something called the holy orders. These events usually only happened a few times a year and called for parishioners to pray and fast. Pope Evaristus believed that the Church needed more of these events and declared that parishioners should participate in three holy orders in December alone.

The Church believes that Evaristus was a martyr. A popular story claims that he was martyred at the same time as Saint Ignatius, who was a bishop in Antioch at the time. Tradition says that the pope thought martyrdom was a glorious end as it meant that a person suffered so much that he would give his life for Jesus Christ. The legend further says that Pope Evaristus was smiling when he was brought to jail and that he continued smiling up until the very end. Soldiers working for the emperor had the pope decapitated. Not everyone believes that this story is true though as the Church cannot verify it. Some believe that he likely died of natural causes in his old age as he was likely in his mid-70s at the end of his papacy. It’s worth noting that early Roman records assigned numbers to other popes who died as martyrs but did not assign a number to Pope Evaristus.

Pope Evaristus was one of several popes buried in Saint Peter’s Tomb. Peter was one of the apostles mentioned in the Bible and the first man chosen to lead the Church. His tomb sits below St. Peter’s Basilica, which is one of the main churches in Vatican City. Pope Saint Evaristus shares his final resting place with Peter and a handful of other popes.