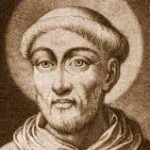 Fabian was born in Rome, Italy circa 200 to a noble family. His father was a member of the prominent Fabius family who helped the local government and supported the arts community in Rome. Historical records do not make mention much about his early life, though his family likely had the money needed to educate the future pope.

The papal election of 250 was a difficult one. Pope Pontian reigned for only five years he was deported. Anterus later became pope but only ruled for a few months before he died. Fabian came to Rome for the election because he had an interest in the proceedings. As the bishops and others considered several prominent men, legend claims that a white dove came out of nowhere and sat on Fabian’s head. They believed that this was a sign from the Holy Spirit that they should pick Fabian. They quickly installed him as the new pope.

One of the biggest issues facing Fabian’s papacy included issues within the imperial government. Both Hippolytus was was an antipope and Pontian were exiled from Rome. Fabian used his position to have their bodies returned to and interred in the city. The new pope worked closely with Philip the Arab to end the persecution of Christians. He also helped create the structure of the Church within the city through the appointments of multiple deacons. The pope sent those men to various areas and later had them convert those living in Gaul. Fabian also created seven new communities in Rome and appointed a deacon to oversee each one.

The peace that those in Rome felt ended when Philip the Arab died. Decius became the new emperor and quickly began speaking out against Christianity. He encouraged followers to turn their backs on the Church and practice pagan rituals. Though many of those in the Church disagreed with his ideas, they were too scared to speak out. Even some of the high ranking officials in the Church refused to speak against him. Fabian was the only one willing to go against the new emperor.

Emperor Decius turned his attention to Fabian, believing that he was one of his main opponents. Fabian became one of the first victims of the new emperor and one of the first martyrs to the Church’s cause. Unlike other men who spent years in prison before their executions, Fabian likely died while in prison. The Church had his remains buried in the catacombs of a local cemetery, which has a crypt for popes. Pope Clement XI later had the former pope’s body moved to a basilica in Rome and dedicated the chapel to him.