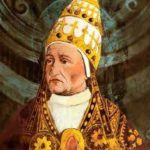 Pope Saint Felix was the 26th pope of the Catholic Church and held the position from 269 to 274. Some records indicate that he was a martyr, but there isn’t much known about his life or papacy. You can check out some facts about this pope and saint in the following article.

Known as Felix, the future pope of the same name was born in Rome, Italy sometime around 206. He was raised in the Roman Empire and likely worked for the Church in different roles as other early popes did. When Pope Dionysius died near the end of 268, the bishops selected Felix as the next pope.

Aurelian, the Holy Roman, had a feud with Paul of Samosata who was once the Bishop of Antioch. When Paul passed away, his successor continued the feud. Though earlier popes refused to choose sides between the two, Felix assisted the emperor but would not remain on his good side permanently. One reason the pope sided with the emperor was that he believed that Paul was a heretic. Paul often spoke out against the Holy Trinity and claimed that the true Trinity was different from what the Church taught.

One of the few acts attributed to Felix is the holding of Mass at martyrs’ graves. Historians believe that this practice dated back decades before his time but that he was the first pope to recognize the practice and sanction it. There are stories that he attended and oversaw Mass as well.

Though Felix sided with Aurelian in terms of theological debates, he later drew the ire of the Holy Roman Emperor. Domnus took over Paul’s position after that man died and refused to give up the bishop position. Aurelian was called in to help after Domnus claimed he was the true Bishop of Rome. The emperor sided with Pope Felix and demanded that Domnus hand over the position.

Though you might think that Aurelian approved of Pope Felix, his later actions would prove otherwise. During the Fourth Ecumenical Synod at Ephesus, the bishops discussed the former pope and claimed that he died as a martyr. Aurelian became known for speaking out against the Church and going against the orders and teachings of future popes. The bishops who attended the synod in 431 claimed that Pope Felix faced persecution at the hands of the emperor and that those actions led to his death.

Historians now think that Felix died a peaceful death and that he was not a martyr. There was some confusion regarding anther man named Felix who lived during the same era and was a martyr. An early biographical book about popes claimed that Felix has a basilica built on Via Aurelia and that the Church had him buried there. Another book claimed that he was buried in the Catacomb of Callixtus, which was the tomb where other early popes were buried. The martyr named Felix was buried in the basilica on Via Aurelia.

Quick Facts About Pope Felix I

Interesting Facts About Felix I

*Felix shares his name with two later popes and two antipopes. As some regarded Antipope Felix II as a true pope, Pope Felix II is sometimes called Pope Felix III.
*As pope, he ruled the Church for 2,185 days or five years and 359 days.
*Historians later discovered a letter written by the pope to Monophysite. Careful scrutiny of this letter later revealed that it was a convincing fake. Other letters were found to be forgeries as well. Those letters seemed to show the pope’s thoughts and feelings on the Holy Trinity, including the relationship between God and Jesus.
*The feast day for Pope Saint Felix is December 30 for most parishioners. In the 1960 General Roman Calendar, his feast day is listed on May 30. Followers of the Coptic Christian Church celebrated his feast day on Hathor 6, which is the third month of the year.
*Felix was 26th of the first 36 popes later canonized as saints by the Church.