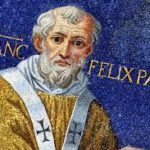 Pope Felix IV held the papacy for only four years in the sixth century, but during that time he instituted a number of important changes, earned a reputation as a statesman, and articulated several important theological positions. All of these actions contributed to his reputation and nickname as “Definer of Grace” at a time when the early church was experiencing incredible turmoil.

Born the son of one Castorius in the province of Samnium (where today Benevenuto is located in southern Italy), Felix entered the church at a young age. In 519, while a deacon, he enjoyed enough of a reputation as a statesman that Pope Hormisdas decided to dispatch him as envoy to Constantinople in an attempt to resolve the Acacian Schism that divided the patriarchate of Constantinople from the Roman see.

By 526, Felix had ascended to the rank of cardinal and earned the respect of Theodoric, the Arian king of the Goths. In May 526, when Pope John I died imprisoned at Ravenna by Theodoric, who suspected him of conspiring with Constantinople, the Gothic king urged the clergy to choose Felix as his successor. The cardinals acquiesced and in July he was installed as the bishop of Rome.

In the interests of protecting the fragile church, Felix cultivated favorable relations with the Goths and, after the king’s death, with Theodoric’s daughter, Amalasuntha, who served as regent during the minority of her son, Athalaric, and who showed particular sympathy toward Catholics. As a show of respect for Felix, Amalasuntha gifted to the church two ancient buildings in the Forum at Rome: the Temple of Romulus and the adjoining Temple Sacroe Urbis; these were converted into the Church of Saints Cosmas and Damian, which still stands today.

Perhaps the clearest indication of Felix’s cordial relations with the Ostrogothic monarchy, however, and the most important of the results of those relations, was the passage of an imperial edict requiring cases brought against members of the clergy be heard by an ecclesiastical court. With the death of Theodoric, many in the clergy saw an opportunity to reverse the persecutions of the church that had been a hallmark of Gothic rule. Felix agreed and, through his minister to Amalsuntha, a monk named Cassiodorus, he was able to earn her consent that complaints against priests would be heard by papal courts rather than those of the empire. By removing cases against the priesthood from jurisdiction under civil law, Felix was able to obtain a distinction between the authority of the church of Rome and that of the pagan empire. This was an essential step in asserting the independence and autonomy of the early church from the control of secular rule and would remain law in Italy for hundreds of years.

During Felix’s papacy, the heresy of Semipelagianism—a fifth-century doctrine which maintained, in essence, that faith must precede grace—returned to southern Gaul. Pope St. Felix IV took an active role in trying to resolve the conflict. The “Capitula” on the status of grace and free will that he dispatched to the bishops of Gaul in order to refute the heresy ultimately became canon in 529, at the Synod of Orange. Felix also demonstrated his intellectual and spiritual vision as a theologian in his writings on grace and free will supportive of Caesarius of Arles as that bishop contended with the Semipelagianism and anti-Arianism of Faustus, the bishop of Riez.

When Felix fell ill in 530, he grew anxious about the political divisions that he still saw in Rome and in the church. Many wished for the church to remain under the protection of the Gothic emperor while others were sympathetic to Byzantium. Fearing that this division would spark turmoil after his impending death, Felix, while still alive, gave his pallium to his archdeacon Boniface to be his successor and ordered excommunication for any who refused to recognize Boniface as pope.

After Felix died, however, a faction of sixty Roman priests, fearing that Boniface would keep the church under the control of the Ostrogothic monarchy with whom Felix had maintained such good relations, refused Boniface. Instead, they elected the Alexandrian deacon and papal legate to Emperor Justinian at Constantinople, Dioscorus. The Byzantine party enjoyed only a brief victor, however: less than a month after being elected, Dioscorus died and Boniface was finally installed as Pope Boniface II.

• Pope St. Felix IV is actually the third official pope of that name: Pope Felix II (pontificate, 355–358) was removed from office as an antipope by Emperor Constantius II.
• During his short papacy, Pope St. Felix IV consecrated at least 39 bishops and 55 priests in what is widely seen as an attempt to ensure that his supporters filled the ranks of the clergy.
• The magnificent mosaic that Felix sponsored to decorate the Church of Saints Cosmas and Damian still exists and includes an image of Felix holding a model of the church to represent his status as its patron (the image was in modern times restored, having been converted by two sixteenth century popes to their own images).
• As a result of the schism provoked by Felix’s attempt to name his successor prior to his death, the church decreed that nominations or even discussions about a pope’s successor were to be prohibited during the life of that pope.
• The feast day for Pope St. Felix IV is held on January 30.