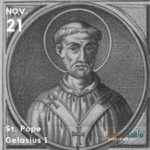 Pope St. Gelasius I has been remembered as the most prolific writer while serving as the head of the Catholic Church for at least its first five centuries. Born into the crumbling world of the failing Western Roman Empire in North Africa before it fell to the Vandal barbarians, he nonetheless argued for the primacy of the Patriarch of Rome over and ahead of the other four patriarchs throughout Christendom found in the East in Constantinople, Antioch, Jerusalem, and Alexandria. Pope St. Gelasius has been remembered as the pope who spelled out the political authority of the pontiffs for the next thousand years of ecclesiastical and secular history, especially in the geographical boundaries that formerly comprised the late Western Roman Empire.

Early Years and Ministry of Pope St. Gelasius I

Gelasius was born in the province of Roman North Africa before the wealthy territory finally attracted and fell to the invading Vandals and their new kingdom they established at Carthage in 428. The rest of his life, whenever he was asked where he was born, Gelasius would say that “I was born a Roman in Africa,” revealing his affection for the long bygone land of his birth. This made Gelasius the third and final pope who was a Berber of North Africa by his ancestry.

Gelasius worked for many years in Rome as an assistant to his predecessor Pope Felix III. St. Gelasius was so accomplished a writer for the day that Felix kept him busy drafting papal documents in his service. In fact, both before and during his papacy term, Gelasius I wrote so many documents that he became known as the most prolific writer of the church’s leaders for the next five centuries at least. Of his surviving writings from over 1,500 years ago, we still have many of his over 100 treatises and letters. In one of these, he famously stated that “There are two powers by which this world is chiefly ruled: the sacred authority of the priesthood and the authority of kings.” This key declaration would define the authority of the papacy for many centuries to come.

Long considered way ahead of his time by his statements, understanding, and the depth of his writings, Gelasius’ writing style put him in between the popes of the Late Antiquity period and the Early Middle Ages. This political doctrine of the papacy and its supremacy that he (first of the later popes) forcefully espoused and then subsequently rigorously defended until he eventually died became the dominant defining political understanding and guiding force of the Catholic Church for the next thousand years.

St. Gelasius I Life and Ministry as Pope

Pope Gelasius was tireless in his efforts to combat what he saw as heresy on all fronts. In the still surviving East of the Roman Empire, he battled with the Patriarch of Constantinople concerning the dual nature of Christ as both divine and human at once. He began the millennium long struggle with the Eastern Roman/Byzantine Emperors over who was the ultimate head of the universal church— the pope living in Rome or the Eastern Emperors in distant Constantinople. The final resolution of this epic struggle of the ages only occurred in 1453 when the last Eastern Roman Emperor Constantine XI was defeated and deposed by the Ottoman Turks.

Closer to home, St. Gelasius I witnessed an annual pagan festival in the city of Rome that offended him greatly. This was known as the Lupercalia. The Roman pagan festival of fertility and renewal had purification overtones that were unacceptable to Gelasius as supreme pontiff. He spent his entire papacy struggling to overturn this festival. In the end by 494 A.D., Gelasius I was ultimately successful in converting the pagan festival he abhorred into the church sponsored Feast of the Purification, which became finally known as the Presentation of the Lord, though it is more commonly referred to today as Candlemas around the Catholic world.

– Born – 410 AD
– Birth Name – Gelasius
– Died – around November 19, 496
– How Pope St. Gelasius I Died
Pope Gelasius was only the Roman pontiff for four short years. He was already 82 years old when he ascended to the office of the papacy in succeeding his predecessor Pope Felix III. It was not a great shock four years later when he died naturally of old age at a respectable 86.

In a day when the typical life expectancy after the fall of the Western Roman Empire amounted to around 40 years for the majority of individuals, Gelasius enjoyed a long and fruitful life. Pope St. Gelasius I accomplished so much in his short yet dynamic time in the Papal office that the church nominated for him a commemorating feast day of November 21st on the anniversary of his death and interment.

Gelasius was born the last of the African and Berber descendent popes. He was thus the third and final one of his Berber African race.

Pope Gelasius was the very first pope to receive the honored title the “Vicar of Christ.”

As personal assistant to his predecessor Pope Felix III, Gelasius proved to be so adept at writing that the pope employed him continuously in drafting important papal documents.

While he was pope himself, Sr. Gelasius I insisted on strict orthodox practice in Catholicism. He was the first such pope to continuously demand obedience by all church hierarchy to the pope in Rome’s supreme authority as the heir to St. Peter who the church was already calling the first pontiff by this time.

Pope St. Gelasius I left behind over 100 treatises and letters that he wrote both before and during his brief time in the office of the papacy. Over 40 of these individual writings survive in their entirety to this day. They are preserved in the Vatican Library in Rome.