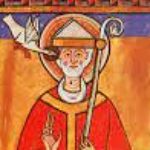 Pope St. Gregory I was the 64th pope of the Church and its leader from 590 to 604. He is one of the only popes who left the Church to live alone before returning and eventually taking a leadership position. In this article, you can learn about the life and times of Pope St. Gregory I and why he’s known as Gregory the Great.

Born in Rome circa 540, he was named Gregory Anicius and grew up in a wealthy family. His father was both the Prefect in the City of Rome and a senator. His mother was a wealthy woman named Silvia who would later become a saint. Gregory also has a sister named Pateria. Though he also had a brother, history does not record what happened to the man. He spent much of his early life in schools where he learned Latin.

Life as a Monk

Following his father’s death, Gregory decided that he wanted to be a monk. He turned one of the family homes into a monastery and took his vows. Under Pope Petaguis II, Gregory became a deacon but continued his vow of poverty. He also developed a belief that people could be punished for their sins before they reached the afterlife.

Gregory would spend several years living in solitude as a monk. He worked as an ambassador for the current pope and traveled to Constantinople and other regions. Though he was named the pope on September 5, 590, he found himself troubled with the position as he did not have the quiet life he wanted. He even contemplated leaving the Church and returning to life as a monk. Gregory changed his mind after realizing what he could do, including helping the poor in Rome. This would lead to him creating a charitable system of giving back.

Known as Gregory the Great, Pope Gregory was a popular figure in the Church. He suffered from arthritis in his later years, which eventually led to his death. Millions mourned him and found ways to both honor the pope and celebrate his life. Pope Gregory created and used a chant that the Church now calls the Gregorian chant in his honor. St. Peter’s Basilica has the relics of the pope in its archives. He is also known for elevating the position of the pope and making it one of the greatest honors in Italy and the world. The Second Vatican Council in 1969 chose September 3 as his feast day. This moved it from the previous date of March 12, which was also the anniversary of his death.