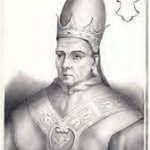 Pope St. Gregory II was the 89th pope in the Church and ruled for more than 15 years. Known for fighting with the Byzantine emperor of the time, he would influence later popes and the amount of power that they had. The Church recognizes him as a saint due to the miracle associated with him. If you want to learn about Pope St. Gregory II, read this article.

Born Gregorius Sabellus circa 669, the future Pope St. Gregory II was a member of the wealthy Savelli family in Rome. His parents were Honesta and Marcellus. Sent to help with the papal court at a young age, he worked under Pope Sergius I and became the treasurer of the court. He was later ordained as a subdeacon and then made a deacon. This led to him working in the Vatican Library and eventually controlling the institution.

When Pope Constantine died, the Church quickly elected Gregorius as the new pope. He then choose the name Gregory II. To help with the issues facing the Walls of Rome, the pope sent men to repair the broken areas. Rainfall made the task nearly impossible as it caused the nearby river to flood, but he would then send more men to stop the flowing waters and continue work on the Walls. Gregory II would also send men to do missionary work in Germany and other countries as a way to bring new followers to the Church.

Much of the papacy of Pope St. Gregory II goes hand in hand with the rule of Emperor Leo III. Leo passed a new rule that increased taxes, but that rule would eliminate the reserves that the Church had. Gregory fought back, which would lead to the emperor dropping the rule but continue his opposition to the papacy. Leo II would later make it illegal for anyone to own or have icons relating to a saint and issued other orders to rule in Rome. The emperor was even involved in a conspiracy to murder the pope. This would cause stress to the pope and lead to his eventual death.

The issues that Gregory had with Leo III took their toll on his body. He suffered from stress, which was exacerbated by his advanced age. He was likely in his early 60s when he died several years after surviving an assassination attempt. The Catholic Church had Pope Gregory II buried in Saint Peter’s Basilica but later lost the records that show the location of his tomb. To honor his contribution and support, the Church canonized him as Pope St. Gregory II.