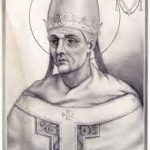 Pope St. Hilarius was the 46th pope and is now an official Catholic saint. He served under the great Pope St. Leo I as a legate, where he encountered significant turmoil. This article will address some fun and interesting facts about the life of Pope St. Hilarius.

Standing Up for the Papacy as a Legate

In 449, under his predecessor, Pope St. Leo I, the eventual Pope St. Hilarius served as a papal legate or representative of the Pope. In this capacity, he was sent to the Second Council of Ephesus. There he was to read a letter from Pope St. Leo I.

The Ephesian representatives, however, decided that the Emperor’s letter must be read first. Though in disagreement, Pope St. Hilarius allowed this and the event to proceed. Even with this appeasement, the Second Council never read Pope St. Leo I’s letter. Outraged, Pope St. Hilarius condemned Patriarch Flavian of Constantinople, who was responsible for this passive-aggressive move.

The Papacy of Pope Hilarius

When Pope Leo I died, the church chose Hilarius to succeed him in Rome. During his pontificate, he worked hard to provide continuity to the church, continuing most of his predecessor’s policies. Hilarius made special efforts in settling a number of territorial disputes between bishops serving in Spain and Gaul, strengthening the church government in those two regions during his papacy.

Meanwhile back in Rome, Hilarius was struggling to fight against the Emperor Anthemius’ edict of 467 that allowed for different sects of the church that had broken away to be tolerated. Once when the emperor came to visit the church in St. Peter’s Basilica, Pope Hilarius called him out for the edict. He encouraged the emperor on St. Peter’s grave (located below the church) to pledge not to allow for any such breakaway sects’ assemblies to be held in the city of Rome.

The central issue Pope St. Hilarius had with the Second Council’s behavior was mutual and proper respect. They placed man’s authority before the word of the Pope and the Church, and in doing so, directly insulted Pope St. Leo I. At the pivotal meeting, Pope St. Hilarius reportedly said ‘contradicitur’ in opposition to what had occurred.

The outward condemnation by Pope St. Hilarius made Ephesus not a very safe place for him. Displeasing Flavian and Pope Dioscorus I of Alexandria, he was forced to flee the region. Though Flavian soon fell ill and died, followers of Dioscorus physically and verbally attacked him in public and blocked his way home. He was eventually able to make it back to Rome and relay the news of the council.

Hilarius built a number of buildings and churches around Rome during his time in the office of the papacy, earning praise from the primary source on his pontificate the Liber Pontificalis. Among these architectural projects were several convents, a chapel of the Holy Cross, libraries close to the Basilica of St. Lawrence (lying outside of the Roman city walls), and two public Roman baths. He also constructed two oratories within the Lateran baptistery, one of which was for John the Apostle and the other for John the Baptist. Thanks to the dedication of the oratories, today the Catholic Church knows to which saints the Lateran church is dedicated.

Pope Hilarius was born on Sardinia, the large Italian island lying to the west of the mainland.

Before becoming the bishop of Rome, Pope Hilarius had to flee for his life from a church synod on one occasion because of his sharp disagreements with the synod leader.

The letters of Hilarius reveal that he was an intelligent, zealous, capable administrator who vigorously corrected abuses and worked to resolve territorial church disputes in Spain and southern Gaul.

Hilarius’ synod in 465 has the distinction of being the oldest Roman church synod from which the acts still survive today.

His alternate name today is St. Hilary, and the church celebrates his feast day on the 17th of November.