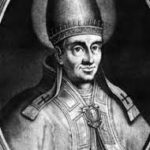 Innocent the I was the 40th Pope and reigned from 401 A.D. until March 12, 417 A.D. The exact date of his birth is unknown, but most scholars believe he was around age 41 at the time he took office. He rose to the papacy after being a deacon in Rome and raised among the Roman clergy. He is remembered as a strong defender of orthodoxy and insisted on the primacy of the bishop of Rome as the administrative leader of the Catholic Church.

He is most remembered for defending St. John Crysosdom after he was deposed as patriarch of Constantinople, participating in the failed attempt to negotiate a peaceful settlement with Visigoth King Alaric and his letters to St. Jerome.

Actions Pope Innocent I Is Known For Today

Building San Vitale in Rome
Through the generosity of Roman matron Vestius, Innocent I was able to build and decorate a church dedicated to St. Gervasius and St. Protasius. This church still stands in Rome today, though a more famous church by the same name stands in Ravenna, Italy.

Negotiating with Visigoth King Alaric
Alaric besieged Rome from 408-410 A.D. Pope Innocent I played an active role in an unsuccessful effort to negotiate a peace between Alaric and Roman Emperor Honorius at Ravenna, which led to a temporary halt to the siege. When negotiations failed, the Visigoths sacked Rome in 410 A.D. The reason that a peace agreement could not be reached is Emperor Honorious refused to pay a satisfactory amount in tribute to Alaric.

Churches were left unharmed by the Visigoths, though the sack had a substantial psychological impact on the citizens of Rome. St. Augustine’s famous book City of God came in the wake of Alaric’s conquests, and played a role in the Pelagian controversy which involved Augustinian pessimism vs. Pelagian optimism.

Strong Defender of the Primacy of Rome
Innocent I strongly believed that as Bishop of Rome, he was the head of the entire Catholic Church in both the East and West. Specifically, Innocent I asserted that Pope Damasus I had granted the archbishop of Thessilonica the authority to consecrate bishops in Eastern Illyria. Innocent I reaffirmed these powers of the archbishop of Thessilonica and placed the administration of all dioceses of Eastern Illyria under him as the representative of the Holy See (Rome).

Innocent I also asserted administrative control in Spain and France. On February 15, 404 A.D., Innocent insisted that local episcopal tribunals forward important matters to the Holy See, including ordinations of the clergy, accepting converted Donatists and Novatianists into the church and questions involving celibacy.

Innoent I also used threat of punishment from Roman Emperor Honorius to suppress Montanism in Africa after the synod of Carthage appealed to him in 404 A.D. This led to many of Montanists reconciling with the Catholic Church.

Innocent rejected the decrees of the Synod of Oak and summoned Theophilus to a new synod in Rome to resolve the dispute. The pope prevailed upon Western Emperor Honorius to pressure the Eastern Emperor Acadius to summon the eastern bishops to a synod in Thessalonica (including Theophilus). However, Acadius favored Theophilus and refused to recognize Rome’s authority in the matter. This synod never happened.

Rejected Pelagianism
The synod of Carthage declared the ideas of British monk Pelagius to be heresy in 411. Pelagius denied the doctrine of original sin, which put him in direct opposition to St. Augustine of Hippo.

A synod of eastern bishops in Diospolis (located in modern Turkey) considered Pelagius’ ideas to be orthodox and wrote to Innocent I in favor of Pelagius. African bishops, however condemned Pelagius at synods held in Carthage and Numidia in 416. Five African bishops (including St. Augustine of Hippo) wrote to Innocent to uphold their condemnation.

Innocent wrote letters back to the African bishops praising their deference to the authority of Rome and declared Pelagius to be a heretic. Pelagius sent a confession of faith to Innocent, but the pope died before the letter reached Rome.

Letters to St. Jerome
Followers of Pelagius attacked St. Jerome and convents of nuns in Bethlehem. They killed a deacon and set fire to a number of buildings. The bishop of Jerusalem (John) was on bad terms with St. Jerome due to the Origenist controvery and refused to do anything to punish the perpetrators.

Innocent sent a condolence letter to St. Jerome and pledged to use the power of the Holy See to prevent such crimes if Jerome would name the guilty parties. He also wrote to the bishop of Jerusalem and reproached him for failing his pastoral duty.

The papacy of Innocent I was all about establishing the primacy of Rome and asserting the right of the Holy See to determine orthodoxy. He took numerous actions to establish administrative control over other bishops in numerous regions and strongly supported St. Jerome and St. Augustine of Hippo. Among other things he is known for, Innocent I is credited with closing the canon of the Bible in 405 A.D. when he sent a list of sacred books to the bishop of Toulouse. This list was identical to the canon from the Council of Trent, which was held over 1,000 years later.