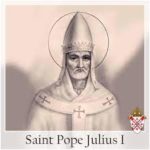 Pope St. Julius,I was one of the early leaders in the Catholic Church later recognized as a saint. His papacy lasted for more than 15 years and only ended with his death. Historians today know him as the pope who created a celebration of Jesus Christ’s birth, which we still celebrate on December 25.

As with many of the early popes, historians know very little about the early life of Pope St. Julius I. He likely used the name Julius as a young man as most of the early popes used their given names after taking the throne. Pope Saint Mar ruled for only 263 days and was in his early 40s when he died from natural causes.

In the modern era, Church officials gather together to nominate the next pope and spend time deciding on the best person. When Pope Saint Mark passed away, the process was quite different. Just four months after his death, officials quietly named Julius the next pope.

Much of what we know about Pope St. Julius I concerns his role in Arian disputes. Arianism was a doctrine that claimed Jesus was the Son of God but also a God separate from God. A group of the doctrine’s followers received attention when they sent delegates to meet with various rulers. Julius asked the bishops within the doctrine to attend a synod in Rome to discuss their beliefs and wasn’t happy when they turned down his request. Athanasius of Alexandria visited Rome when his former city banished him. Julius met with the man and held a synod where he named him a bishop of the Catholic Church.

Many of the men who followed Arianism lived in the eastern region. They held the Council of Sardica in 343 where more than 70 of their followers agreed to leave Bulgaria. Some of those same men were on hand during a second council in which they deposed Julius. More than 300 bishops and other Church officials in the western region disagreed with this decision. They released a statement in which they claimed that Julius was the true pope. This also led to the pope affirming a canon that prevented bishops from transferring the papacy to others.

The biggest and most important thing that historians know about Pope St. Julius I concern the celebration of Jesus Christ and his birthday. Heretics and others in Rome celebrated a festival every year around the end of December. Pope St. Julius I released an official decree in which he claimed that Jesus was born on December 25. Historians do not know the actual date of his birth. They believe that the pope picked this date as a way to draw attention away from the festival and put it back on the Church. Others think that he picked this date as a way to honor Aurelian who was a former ruler in Rome and that he hoped the ruler’s followers would convert to Christianity.

Pope St. Julius I looked for ways to bring more attention and followers to the Catholic Church. He built or helped build several churches and basilicas to give Romans and those in other areas more places to worship. Though known as Pope Julius for many years, he became Pope St. Julius I after the Catholic Church named him a saint and others used the name during their papacies.