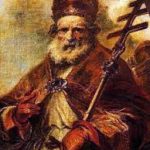 Pope St Leo I was the 45th pope of the Catholic Church and the first to use the name Leo, which was also his birth name. Known for convincing Attila the Hun to not invade Italy, the pope is a saint in the Eastern Christian Church. Historians know much about his life and papacy, which lasted for more than two decades.

Given the name Leo at birth, the future pope was born in Tuscany, which was part of the Western Roman Empire. Though he spent his whole life in Rome, he gained a reputation outside of the city for his work. Leo spoke to John Cassian and convinced him to speak out against Nestorius and later served as an archdeacon. Pope Sixtus III appealed to him personally to handle a military dispute.

It took a month for bishops to convene and elect a new pope, but they quickly picked Leo as the successor to Pope Sixtus III. He established the idea that original sin affected human nature as a doctrine of the Church in direct opposition to a group know as Pelagians. The pope believed that they should not take communion because of their beliefs. He also gained a strong reputation for the work he did around the city, especially the charitable acts that he believed all Christians should perform.

During his time as pope, Leo settled many disputes among the leaders of the era. He gave many sermons, some of which still exist in the Vatican archives. In 452, Attila the Hun brought his troops and attacked Italy. Some claim that he demanded the then Holy Roman Emperor send him the man’s sister, who he wanted as part of a dowry. As Attila was on his way to Rome, he suddenly and abruptly changed his mind and left the country. A popular legend from the time claims that Leo met him in person and showed him a sword hidden beneath his papal robes. The implication of what would happen if Attila continued was enough to make the man leave. Historians now believe that the pope likely sent another man in his place. Some also think that his troops realized that they could not defeat the armies in front of them.

Though the Church does not list an official cause of death, Pope St Leo I likely died of natural causes. He was in his early 70s when he passed away while serving Rome. As was the tradition at the time, Church workers buried him on the grounds of St. Peter’s Basilica in a tomb near St. Peter’s grave. Near the end of the 700s, the Church had his body removed and buried again inside the basilica as a way to honor him. Recognized as a pope in three different branches of the Catholic/Christian Church, he was one of only two popes given the title Doctor of the Church. Some also refer to him as Leo the Great.

*Pope St Leo I ranks at number 10 on the official list of the longest-reigning popes in history. His papacy lasted for more than 21 years.
*The Catholic Church, Eastern Orthodox Church and Anglican Communion branch all recognize Leo as a saint. Though his feast date was originally on April 11, it became November 10 after changes to the 1969 calendar. In the Eastern Orthodox Church, his feast date is February 18.
*Thirteen popes in total used the name Leo upon accepting the papacy. Though this was the birth name for some, others chose it in honor of Pope Leo I.
*Pope St Leo I helped create and establish the idea of the hypostatic union. This is a belief within the Church that claims Jesus Christ was a human man but also a divine individual.
*Francisco Herrera the Younger created a painting of Pope Leo that he called Saint Lego Magnus. The original piece is on display in the Prado Museum in Madrid, Spain.