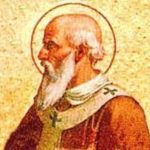 Pope Leo II served the Catholic Church as pontiff for less than a year from his coronation on August 17, 682 to July 3, 683. As a personally accomplished singer, he encouraged music in the church. Leo II also fought against heresy, approved the acts from the important sixth Council of Constantinople in 680 A.D., and kept positive relations with the Eastern Emperors in Constantinople. For his accomplishments and devotion, the Western Church canonized him as St. Leo II following his death.

Pope Leo II was born in Sicily to a father named Paul. The Book of the Pontiffs states that St. Leo was an eloquent man who was well versed in the Bible, accomplished in both Latin and Greek, and remembered for both his singing and chanting.

The Western church elected Leo to the papacy in December of 681 as the successor to St. Agatho, but he could not be crowned until eight months later on August 17, 682 A.D. The Byzantine (Eastern Roman) Emperor delayed Leo’s confirmation to the role over a dispute involving a tax that popes were required to render to the imperial treasury when they were consecrated. St. Agatho had received the promise from Emperor Constantine IV that this tax would be eliminated or at least reduced, and ongoing negotiations over it delayed the imperial approval of Leo’s ascent to the Holy See.

In the brief time that he was in the office of the pontiff, Leo II managed to carry out a few policies. The most important of these was his receiving, approving, and publishing of the acts that came out of the Sixth Ecumenical Council of Constantinople in the year 680 A.D. Pope Leo II ordered the translation of portions of the acts into Latin from the original Greek so that the clergy would be able to understand them throughout the Western European churches.

Many of the letters that Leo II sent to the Spanish king, nobles, and bishops survive to this day. In these letters, Pope Leo II explained the impacts of the council and instructed the bishops to follow the decrees.

One of the condemned heresies that Leo and the church council in Toledo ratified surrounded Monothelitism, the idea that Jesus Christ possessed two natures yet only a single will. Leo went to great lengths to condemn his predecessor Pope Honorius I (reigned 625-638 A.D) not for teaching heresy but for not aggressively opposing it.

Another issue that Leo dealt with surrounded the status of the important city of Ravenna in northern Italy. The archbishops of Ravenna sought to gain the title and rights of patriarchs so that they could be free from any direct over-lordship of the papacy. In the time that Leo served as pope, he regained control over the archbishops of Ravenna thanks to the orders of the Byzantine Emperor Constantine IV in Constantinople.

Leo II is regarded as a pontiff of the so-called Byzantine Papacy.

Pope Leo II was recognized by his contemporaries as a talented singer.

Leo feared another attack and looting of the city of Rome by the Lombards so he moved the martyrs’ relics from the catacombs (where they had been housed) to a church he specifically built for them.

Unlike many popes in the Middle Ages, Leo II worked well with the Byzantine emperor, cooperating with Emperor Constantine IV.

Pope Leo II was made Saint Leo II according to the Roman Martyrology with a feast day that is today celebrated on July 3.