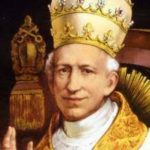 Pope St. Leo IX served as lord of the Papal States and bishop of Rome during the years 1002 A.D. through 1054 A.D. Leo has received near-universal recognition for being the most important German pontiff from the Middle Ages. His papacy saw the start of the devastating Great Schism in 1054 that separated the Catholic Church and Orthodox Church for nearly a millennium until the modern era.

Leo IX received the given name of Bruno of Egisheim-Dagsburg. Born a member of an important aristocratic family, Bruno attended Toul for his education. On September 9th of 1027 A.D. the church consecrated him as a bishop at an unusually young age of 25.

According to the practice of his day, Bruno was not elected pope by the church in Rome but was instead appointed to the papacy while 47 years of age by Holy Roman Emperor Henry III. Bruno took the name of Leo IX and would not start his papacy until he attained election from the clergy and people of the Eternal City. Once he received their approval in Rome, Pope Leo IX took the throne of the papacy formally on February 12, 1049 A.D.

The primary goals of Leo IX were to eliminate the main evils that he saw in the church of his age. He wanted to do away with the selling and buying of church offices (simony), marriage among the clergy (concubinage), and secular ruler appointments of church offices (lay investiture). To accomplish such major reforms to the Catholic Church, Leo understood that he would need to transform the church into the centerpiece of Christian life and society.

Leo recognized the scope of the challenges, and he summoned to his headquarters in Rome men he had worked with and knew well from his time as the bishop of Toul. Some of these men were Frederick of Lorraine (who became Pope Stephen IX), Humbert of Moyenmoutier, and Hugh of Remiremont. Each of these men he appointed as cardinals. Hildebrand a Cluny monk (who would one day become Pope Gregory VII) also came to help Pope Leo IX. With the efforts of these lieutenants, Leo IX was able to radically change the papacy from being a more localized Italian organization into an international powerbroker.

Pope St. Leo IX believed in conservative moral values and put these at the center of his reforms of the Western Church. Among his first acts in office was to call the famed Easter Synod in 1049. The Holy Roman Emperor Henry III joined Leo in Saxony and they traveled together to Cologne and then on to Aachen. Pope Leo called for the higher ranking clergy to meet him in Reims as well. At this council, the pope successfully passed a number of critical decrees of reform.

A broader conference that Pope Leo called was his council in Mainz where the French, Italian, and German church leaders attended alongside emissaries from the Byzantine Emperor of the East. Unfortunately for the unity of Christendom, Leo’s papal legates later formalized the permanent breakdown in relations between eastern and western churches when they excommunicated the Patriarch Michael I Cerularius of Constantinople in what became known as the Great Schism of 1054 A.D.