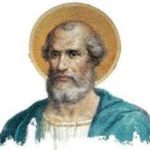 Pope Linus was the second pope and second leader of the Christian Church. His papacy lasted for roughly nine years and occurred directly after the Papacy of Saint Peter. As he is also a saint, he is sometimes called Pope Saint Linus. You can find out more about Pope Saint Linus in this article.

Born circa 10 AD, Linus was one of the earliest popes in the Church. Born circa 10 AD, he was born in Volterrae. This town still exists but now uses the name Volterra. This makes Linus the first Roman pope. Some believe that his mother was Claudia as her name appears close to his in the Bible. An early biographer states that his father was Herculanus and that his family lived in Tuscany. He was close to Paul the Apostle and traveled with Paul to Rome. Linus was with him when Paul passed away.

Early Church records claim that Peter and Paul picked Linus as the next leader. After they established the Christian Church and picked Rome as its headquarters, they asked Linus to serve as its leader. Some records indicate that he ruled during the time of Nero and was in Rome when Nero set fire to the city. Others think that his papacy began several years after Nero’s reign. The Church does not have any records from this era to show when he became pope or when he died.

As the Bishop of the Church of Rome, Linus was responsible for overseeing a new and emerging church. Though Peter established some of the policies that it used, Linus was the one who would shape the Church for the future popes. He was the first to allow women to attend church services, though he asked that they remain quiet and that they cover their heads and faces to attend. Linus likely faced opposition from other leaders from outside of Rome and attempted to hold the Church together.

Linus is listed as a martyr along with Peter and several of the popes who came after him. There is no evidence that he was a martyr or records that show how he died. In 1615, workers discovered a tomb in Saint Peter’s Basilica that had the letters LINVS engraved across the top. Historians from the time believed that this was proof that Linus was buried there, but modern historians think that those letters were likely the last name of another man. In a biography of the pope, his official resting place was named as Vatican Hill. This book claims that he was buried close to Saint Peter in a tomb that now sits underneath Vatican City. Though there isn’t any proof that his tomb is there, most historians and Church followers believe that Pope Saint Peter is buried below the city. The Church celebrates Pope Saint Linus with a feast day on September 23.