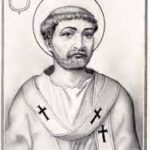 Pope Saint Lucius I was the 22nd leader of the Church and the first to use the Lucius name. He ruled for less than one year and faced opposition from Novatian who was an antipope. You can learn about the papacy of Lucien and his relics in this article.

Unlike popes who chose their papal names based on who they admired, Lucius used his birth name as pope. Born circa 205 AD, he was Roman by birth and spent nearly his entire life in this Italian city. He grew up with an unnamed mother and a father by the name of Porphyrianus. The future pope also worked as a member of the Church’s clergy and served under both Pope Fabian and Pope Cornelius. Pope Cornelius was banished from Rome and spent his last days writing letters and facing severe hardship. When Pope Cornelius was martyred, the Church quickly looked for his successor and decided on Lucius.

Not long after becoming pope in June of 253, Lucius was banished from Rome. This was a common practice of the emperor at the time because he believed that Christians would fail without a leader. He also viewed banishment as a type of punishment. Lucius was a unique case in that he received permission to return to the city a short time later. He would spend his last days in Rome and serving the Church.

As he was pope for such a short period, not much is known about his papacy. He faced issues relating to Novatianism and after Novatian named himself the true pope and Holy See. Novatian made this statement after the election of Pope Cornelius in March of 251 and held the position for around seven years. Historians and the Church now consider him an antipope. Cyprian, the Bishop of Carthage, left behind several letters in which he praised the pope for speaking out against the antipope and his followers.

Pope Lucius I passed away less than one year after claiming the papacy and likely only ruled for a few months. As was the custom at the time, the body of Lucius was placed in the Catacomb of Callixtus. If you visit the cemetery today, you can still see his original tomb though he’s no longer buried there. Santa Cecilia received his relics and stored them with the relics of Saint Cecilia. Saint Ansgar’s Cathedral built a reliquary where they stored the supposed head of the pope. Legend claims that demons arrived in a Danish city and that his skull was the only thing that scared them. Once they placed the skull in the reliquary, the demons disappeared. Some now believe the skull belonged to a crusader king.

Quick Facts About Pope Lucius I

*Lucius was given his name at birth and was born in Rome, Italy.
*His birth date is listed as circa 205 AD.
*He died on March 5, 254.
*Though early records indicate he was a martyr, historians now think that he likely died from natural causes.
*His papacy began on June 25, 253.
*His papacy ended on March 5, 254.
*Pope Stephen I became the next pope and is also known as Pope Saint Stephen.

Interesting Facts About Pope Lucius I

*The Roman Catholic Church recognizes Lucius as a saint and calls him Pope Saint Lucius. His feast day is held every year on March 5, which is the date of his death.
*During the reign of Pope Pius V, the calendar does not list a feast day for Pope Lucius. The General Roman Calendar listed his feast day as March 4, which was the same date that followers recognized Saint Casimir. This led to the Church only mentioning the former pope during Mass. This practice continued until 1969 when a revision of the calendar moved his feast day to the following date.
*An early biography of popes claimed that Pope Lucius was martyred by Emperor Valerian. The emperor did not start these practices until several years later, which might prove that he wasn’t a martyr.
*A church in Denmark claimed for many years that it had the head of Pope Lucius in its archives. The Danish National Museum and the University of Oslo later had the head. Modern testing found that the skull dated to a century later than the pope and that it wasn’t his.
*Though his official rein is listed at 253 days, historians now think that he ruled for somewhere between five and six months.