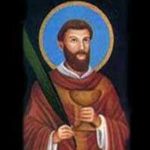 Marcellinus was the 29th pope in history and one of the only men to use his personal name as pope. He ruled for more than seven years and was in his 50s when he passed away. Marcellinus is one of the popes now recognized as a saint in the Catholic Church.

Known as Marcellinus before becoming the pope, he was born in an unnamed city in Rome sometime around 250. He likely worked for the Church in some type of capacity before taking on the position. On June 30, 296, the Church elected Marcellinus as the next pope.

Marcellinus inherited a papacy fraught with problems stemming from the pagans in Rome. Caesar Galerius was one of the main opponents of the Church. He often spoke against its teachings and rallied Roman citizens to follow him. Roman Emperor Diocletian began listening to him and eventually implemented rules against Christianity. He first demanded that Christians leave the army and then asked soldiers to destroy any religious texts they found that related to the Church. The emperor also confiscated homes and buildings owned by Christians. Not long before Marcellinus became pope, Diocletian began penalizing Christians, demanding that they renounce the Church or face execution.

In an attempt to help parishioners, Marcellinus first followed Diocletian. He handed over the Scriptures to the emperor and agreed to close some buildings. His attempts to side with the emperor were in vain though as Diocletian wanted to end the Church and stop the spread of Christianity.

There is some confusion regarding the last days of Marcellinus. This is due in part to the lack of official records from the time and the fact that historians added to his story in the 13th and later centuries. According to some reports, he grew despondent with the emperor and the actions he took. Marcellinus approached a large council of bishops and asked them to judge him based on those actions. In one version of this story, he stripped naked in front of them.

Most reports indicate that Marcellinus removed himself from the papacy because he believed he did not deserve the position. After meeting with the bishops, they found that he had good intentions and asked him to reclaim the throne. When word reached the emperor, he was incensed that the man refused to stand by his side and turn his back on his beliefs. Diocletian orders soldiers to capture the pope and sentence him to death.

The persecution of Christians under Diocletian was so severe that historians believe up to 17,000 people died. When the pope refused to pay his respects to the false gods, the emperor sentenced him to beheading. Legend claims that Marcellinus told the bishops to excommunicate him because he did not deserve a Christian burial or entry into heaven. Following his execution, he was likely buried in Rome with other former popes. Though there is not any historical evidence to indicate that he died as a martyr or was beheaded, the Church canonized him as a martyr. He is now recognized as a saint by two different sects of the Christian faith.

*Marcellinus was born somewhere in Rome, which was part of the Western Roman Empire.
*The Church does not list an official birth date for the pope but thinks he was born circa 250.
*He died in 304.
*No records list an official cause of death for Pope Marcellinus, but some historians believe he died as a martyr.
*His papacy began on June 30, 296.
*The papacy of Pope Marcellinus ended when he died in 304.
*Marcellus I became the next pope and ruled for less than one year.

*Christians celebrate the feast day of Pope Saint Marcellinus on April 26. In the Serbian Orthodox Church, they celebrate his feast day on June 7.
*According to the official Church records, Marcellinus was pope for seven years and 301 days or 2,856 days.
*The General Roman Calendar set his feast day on April 26 sometime during the 13th century. This calendar also shows that he shares his feast day with Saint Cletus. The Church recognizes him as a saint because of his alleged martyrdom.
*During his tenure as pope, Marcellinus established a Christian state called Armenia. This state would fall under the control of Tridates III in 301.
*Due to the similar name of his successor, Marcellus I, some records confuse the two men. Marcellinus ruled for much longer than Marcellus did.