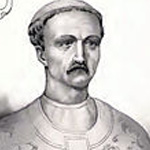 Born into a wealthy family in Rome, Pope Paschal I was elected to lead the Roman Catholic Church just one day after the death of his predecessor, Stephen IV. He entered his high office at a time when Rome was deeply unsettled politically with numerous factions competing for power and influence.

Pope Lucius I was born to Bonosus and Episcopa Theodora in Lazio. His parents were of the wealthy Massimi family. When young Pascale grew to manhood, he took the orders of a Catholic priest.

Probably thanks to his wealthy family and powerful connections, Pope Leo III appointed Pascale to be the leader of the St. Stephen of the Abyssinians monastery. One of the primary functions of this abbey was to take in pilgrims coming to Rome. Many of these were refugees from the Byzantine Empire.

Pascale rose upward quickly in the ranks of the church. He was elevated to the position of Cardinal of Santa Prassede by Leo III.

Pascale Massimi was selected as the next Pope by the College of Cardinals on January 25, 817. It was the day after Pope Stephen IV died. This happened even though Emperor Louis the Pious had yet to sanction the move. At the time, the Catholic Church was beholden to the Frankish Empire.

However, the new pope was able to smooth things over and win the approval of the Frankish Emperor to secure his position. Pope Paschal I explained that his hasty elevation was necessary because of the shaky nature of the political situation in Rome at the time.

Like several of his predecessors, the new Pope spent much of his time dealing with the issue of iconoclasm. Those who supported iconoclasm believed that all statues and images of religious figures should be destroyed based on the passage from the Bible’s Book of Exodus that warns against “graven images.”

The Byzantine Empire was a proponent of iconoclasm while the Roman Catholic Church took the opposite view. The Church held that statues of such figures as the Virgin Mary, Jesus and saints were important touchstones for the people of the church.

The issue of iconoclasm resulted in an ongoing cold war with the Byzantine Empire which represented the Easter Orthodox faction of the Catholic faith. That cold war frequently broke out into hot wars.

Crowning of Lothair I as King of Italy

Pope Paschal I crowned Lothair I as King of Italy. Lothair was the grandson of Charlemagne the Great, Emperor of the Franks. The aforementioned Louis the Pious was the son of Charlemagne and the father of Lothair.

Pope Paschal I undertook a number of ambitious construction projects. He commissioned the building of three of Rome’s most historic basilicas. These are Santa Prassede, Santa Cecilia in Trastevere and Santa Maria in Domnica. Additionally, Pope Pachal ordered major renovations to the Basilica of Santa Maria Maggiore.

It is significant to note that Pope Paschal I leveraged major church building projects to solidify and extend the authority of the Church as a bona fide independent state.

When Pope Paschal I died in 824, the Roman Curia denied him the honor of burial in St. Peter Basilica where all popes are interred. They cited his “harsh treatment” of Roman citizens. He was placed instead in the church he built, Santa Prassede.

It took well more than 500 years, but Pope Paschal I finally achieved sainthood in the late 16th Century. The Feast Day of Saint of St. Paschal is celebrated on February 11 of the Roman Calendar.