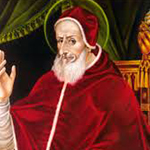 Saint Pius V was the 225th Pope. While he only held onto the position for a little over six years, his impact on the Church was monumental. Known for his piety and strict moral compass, the Pope helped to reshape the Church’s reputation. He rose to the Papal throne during a tumultuous time when amoral acts ran rampant, and threats continued to weaken Catholicism throughout Italy.

During his tenure, the pontiff managed to whip the Church and the Papal States into shape. He solidified and reformed Catholicism, putting many doctrines into effect. The Pope’s policies prioritized the Church and did not take secular rulers into account. While this did ruffle some feathers from a political standpoint, his actions ultimately earned him adoration and sainthood.

Born Antonio Ghislieri, the future Pope and saint came from a modest family in the historic Italian state Duchy of Milan. He worked as a shepherd until the age of 14, when he entered the Dominican Order. After entering the Order, he changed his first name and passed through several monasteries.

In 1556, Ghislieri was made Bishop of Sutri by Pope Paul IV. His dedication to virtue and strong discipline earned him much praise throughout the Church. He was appointed as an inquisitor for Christendom and was frequently summoned to Rome and even stood up predecessor. Ghislieri was so strong with his convictions that he opposed Pope Pius IV‘s attempt at nepotism. This opposition was condemned at the time, leading to changes in his position as an inquisitor.

However, the ramifications of his opposition didn’t last long. His predecessor dies before he even returned to his episcopate, launching the next papal conclave.

Thanks to the influence of the Archbishop of Milan, Charles Borromeo, Pius V was elected pontiff. He quickly went to work reforming the Church’s tattered reputation.

He had several notable achievements throughout his reign. One of the most significant was restoring discipline and morality in the Church. He established many new policies, including cutting back on costs. The Pope cracked down on nepotism and bribery, putting funds towards helping the poor.

Pope Pius V also standardized Holy Mass, implementing stringent policies that had a rippling effect throughout the Church. He enforced cannons and put the decrees of the Council of Trent into effect.

The Pope also had to deal with the growing threat of Protestantism. The religion swept throughout England and Scotland, cultivating fears of its spread to Italy. He attempted to protect the Church against heresy by excommunicating Queen Elizabeth I of England. The move only antagonized empires throughout Europe and led to the active persecution of Catholics.

Luckily, the Pope’s efforts of protecting the Church against the Turks were far more successful. He created the Holy League, a group of Catholic maritime states. Together, the group successfully won a battle against the Ottomans.

Overall, Pope Pius V was a highly respected leader. His dedication to the Church and prayer was a stark contrast to his predecessors. At a time when papal luxury was customary, Pope Pius V chose to focus his attention on reforming the Church and returning it to its pious and moral nature. Thus, he was officially beatified and canonized after his death.