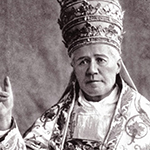 Pope Pius X was the 257th leader of the Catholic faith, as well as the tenth to choose “Pius” as his name. This article is intended to be used as a study guide in order to better grasp how distinct Pius X was from the Church’s other popes. below, you will find a summary of his early life, an overview of his time with the church prior to becoming pope and also a sheet of statistics and tidbits at the bottom.

Giuseppe Sarto was born within the city of Riese, then part of the Austrian Empire. He was the second of ten children between Giovanni Sarto, a postal worker, and Margarita Sanson. Despite scraping by when his father was only a mailman, Giuseppe’s parents pushed him to education; this pursuit began with a daily walk of nearly 4 miles to go to school.

Giuseppe developed an interest in Latin, studying under Riese’s priest, then moved on to the gymnasium of Castelfranco Veneto. By 1850, he received a tonsure from the Bishop of Treviso and a full scholarship from Treviso’s diocese. Giuseppe applied these funds toward finishing his education of the classics, philosophy and theology at the Seminary of Padua.

Career As The Church.