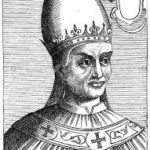 Pope Sergius I served as both head of the Catholic Church in the West and the bishop of Rome during the years of 687 up to his passing in 701. When he was chosen to be the pontiff, his two primary rivals Theodore and Paschal were engaged in an argument about which of the two of them would be consecrated as the next pope. Sergius’ pontificate was overshadowed by his handling of the Quinisext Council since he would not accept the canons from this church council in the East.

Brief History and Background on Pope St. Sergius I

Pope St. Sergius I Early Life and Back Story

Pope Sergius and his family came from an Antiochene Syrian heritage. They had removed from the Holy Land after the Arab conquests began in order to relocate to Palermo, Sicily. In the reign of Pope Adeodatus II the young Sergius departed from Sicily for Rome. Thanks to the Arab Caliphate assaults on Sicily that were underway in the mid 600’s Sergius I joined the mass exodus of Sicilian clergy who moved to Rome. Under the pontificate of Pope Leo II, Sergius I became ordained as Santa Susanna’s cardinal-priest on June 27th of 683 A.D. In short order Sergius I rose to the top of the clergy ranks in Rome. He stayed in his post of cardinal-priest up to becoming chosen and consecrated as pontiff.

As the Pope Conon was dying, Archdeacon Pascal attempted to bribe the Byzantine exarch of Ravenna with an enormous amount of money to succeed Conon. The exarch complied and saw Pascal elected by a group of the people. Meanwhile another faction backed the election of archpriest Theodore. The majority of the people and clergy stood for neither of them, choosing Sergius instead and consecrating him as Pope Sergius I.

Pope Sergius I loved the English people and kingdoms. He received the West Saxon King Caedwalla to Rome, where Sergius baptized him and then buried him in St. Peter’s upon his death in the Eternal City. St. Sergius I also personally intervened to see St. Wilfrid restored to his see while enormously favoring the Abbot St Aldhelm of Malmesbury. Pope Sergius I even attempted to get the legendary early English writer the Venerable Bede to be his papal adviser. Sergius I consecrated an Englishman Willibrord as bishop and dispatched him to preach the faith to the Frisians.

Emperor Justinian attempted to force Pope Sergius I to sign off on the decrees from the Trullan Council (Quinisext) of 692 A.D. This permitted deacons and priests to keep any wives which they had been married to before they were ordained into the clergy and also attempted to elevate the Patriarch in Constantinople to the same status enjoyed by the Pope in Rome. Pope Sergius I would not agree to the council canons, so the emperor sent one of his bodyguard officers to seize him and carry him to Constantinople.

In an amazing moment in papal history, the people of the militias in Ravenna and Rome protected Pope Sergius against the imperial officer and his guards. After outlasting Emperor Justinian who was overthrown shortly thereafter, Pope Sergius I extinguished the Schism of the Three Chapters (Aquileia), added processions to a number of churches, and adorned or repaired many basilicas.

An attempt was made to arrest Pope Sergius I by Byzantine Emperor Justinian in 695 A.D. The militia of the Exarch of Ravenna protected him from capture, starting a riot in Byzantine Italy. Pope Sergius used his popularity to put down the uprising. He died six years later at aged 51 on September 8, 701 A.D.

Two other candidates were vying for the papacy when Sergius I became selected by the people of Rome.

Pope Sergius I enjoyed many relationships and interactions with the English peoples.

St. Sergius received the English West Saxon King Caedwalla in Rome, baptized him, and then buried him in St. Peter’s (old) Basilica when Caedwalla died.

Pope Sergius is responsible for the addition of the Agnus Dei to the Catholic mass.

Eastern Emperor Justinian attempted to arrest Pope Sergius I, but the people of Rome protected him against the imperial forces of the Exarch of Ravenna.

Pope Sergius outlasted Emperor Justinian who was overthrown six years before the death of the pope (who died in 701 A.D.)