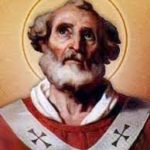 Pope Silverius served as the pontiff from years 536 A.D. to 537 A.D. in an extremely brief reign that was marked by intrigue and double dealing. He was deposed, exiled, and murdered in a scheme concocted by the Byzantine Imperial Empress Theodora. The feast day of Silverius is celebrated on June 20th.

Silverius was born to the future Pope Hormisdas in Frosinone, Lazio at an unknown year before his papal father joined the clergy as a priest. Historians believe that Silverius became consecrated on June 8, 536 A.D. At that point in his church career, he was a mere sub deacon when the Ostrogothic King Theodahad forced the church into electing and consecrating him.

December 9th of 536 B.C. saw the Byzantine military General Belisarius march into Rome with Pope Silverius’ full approval. Meanwhile the King Theodahad had died and been succeeded by King Witiges who assembled his army and laid siege to Rome, the pope, and General Belisarius for a few months until the citizens were starving.

Pope Silverius endured accusations of treachery with the Ostrogoths from the Byzantine General Belisarius and found himself deposed from the papacy by Belisarius in March of 537 A.D. Silverius was shipped off into exile after Belisarius’ wife Antonina charged him with co-conspiring with the Ostrogoths. Belisarius did more than simply banish the stricken pope; he similarly exiled a group of important senators including Flavius Maximum, descended from a prior Roman Emperor. Meanwhile, the papal legate Vigilius who was in Constantinople at the time was dispatched to the Eternal City to take over as pontiff in the absence of Silverius.

When Silverius appealed to Emperor Justinian in Constantinople, the Byzantine emperor ordered that the former pope be taken back over to Rome for a trial. What happened upon his arrival back in Italy is sinister. Rather than run a trial for the deposed pope, Belisarius instead turned him over into the hands of the new Pope Vigilius. The Liber Pontificalis stated that Pope Vigilius then exiled Silverius off to the abandoned desolate Palmarola in the Pontine Islands. Here the devastated former Pope Silverius died of starvation (or possibly foul play) within months.

Years later, the once Pope Silverius became a saint through popular acclaim. He remains the patron Saint of Ponza, Italy to this day. A list of Catholic saints dating to the 1000’s is the first to mention him as a saint.

This legacy continues in the United States as a number of immigrants from the island relocated to the Bronx in the Morisania area. They continue to honor the Festival of San Silverio each year at the Church of Our Lady of Pity, where they call on Pope St. Silverius’ name for help.

Pope Silverius suffered demotion to a rank of monk and was driven into exile from the Holy See to Lycia in southern Anatolia (modern day southern Turkey). His appeal to Emperor Justinian got him sent back to Rome for an official inquiry, but Belisarius handed him over to the new Pope Vigilius. The new pontiff forcefully exiled Silverius to Palmaria Island off of Naples. Pope Silverius died there either from starvation or being outright murdered while living on the desolate island.

Silverius was born legitimately to the future Pope Hormisdas in Lazio a few years before his father became a priest.

St. Silverius served the Catholic Church as sub deacon when the king of the Ostrogoths forcefully nominated him to be the new pontiff.

Pope Silverius succeeded Pope St. Agapetus I who had enraged Byzantine Empress Theodora through condemning her Patriarch Anthimus in Constantinople.

General Belisarius falsely charged Pope Silverius with treason and conspiracy with the Ostrogoths.

Pope Vigilius exiled Silverius through force to the island Palmaria off the coast of Naples where the fallen pope perished either from starvation or as a victim of murder.