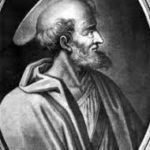 Pope Simplicius served as the pope for 15 years, from the year of 468 A.D. until his death in 483. Living in a period of great turmoil that saw the collapse of the Roman Empire, Simplicius struggled to hold together the church in the West while defending the city and people of Rome from the chaos threatening to destroy the eternal city. In the time of his pontificate, the long-lasting Western Roman Empire finally ended in a period of chaos. Pope Simplicius fought heresy, expanded the consecration of bishops to months other than only December, and attempted to be a counterbalance to the chaos of Germanic barbarian invasions.

Pope Simplicius’ Early Years and Election to the Papacy

Simplicius was born near Rome in the city of Tivoli to a Roman citizen father by the name of Catinus. Very little is known about his early life, including the year in which he was born. When his predecessor Pope Hilarius died, the church chose Simplicius to be the new pope and had him consecrated only 10 days later on February 25th of 468 A.D.

As pope and Bishop of Rome, Simplicius struggled to maintain his authority within the Western church. In the face of the Eutychian heresy, he sided with the Council of Chalcedon and its decisions. As the Eutychians installed their own candidate Petrus Mongus in Antioch, he appealed to the Eastern Roman Emperors Basiliscus and Leo I to take action to restore the Catholic bishop. He made the same demands of the emperors when Petrus Fullo seized the seat of the patriarch in Alexandria, Egypt.

Simplicius convened his own synod in Rome in the year 478 A.D. in which he declared anathemas against bishops in the East who practiced heresy including John of Apamea, Peter Fullo, and Paul of Ephesus. Meanwhile in the West, the pope struggled to keep up his authority as the supreme patriarch in the Western Empire. He appointed Bishop Zeno of Hispalis (modern day Seville) to be his Papal Vicar to Spain.

In another challenge to Pope Simplicius’ authority, Archbishop Joannes I of Ravenna consecrated Bishop Gregory of Modena in direct violation of what Simplicius wanted. Simplicius sternly rebuked the archbishop for this decision.

A noteworthy decision that Pope Simplicius made was his move to consecrate bishops in months beyond December in the period leading up to Christmas. He decided to expand the timeframe to include February also.

Pope Simplicius also oversaw a building program during his pontificate. He receives credit for the Santa Bibiana church built to memorialize St. Bibiana a martyr. Simplicius personally dedicated a new church on the Celian Hill called the Church of San Stefano Rotondo, as well as one on the Camp Verano he dedicated to Saint Lawrence and another church of St. Andrea.

Another of his great accomplishments had to do with the constant raiding of invading barbarians in those turbulent years. Pope Simplicius made it a personal mission to help the people of Rome to navigate through those dark and dangerous times. When the barbarian Odoacer became king of Italy in place of the last Roman Emperor Romulus Augustulus, Simplicius remained in effective command of the city of Rome, even though Odoacer was the follower of another sect within the church.