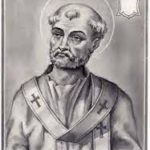 Pope St. Sixtus I was a Roman man and the seventh leader of the Church. He was the first pope to choose the Sixtus name, though five other men would later choose this name. Sixtus I also later became a saint in the Catholic Church. You can learn about him and his time as pope in this article.

Born as Xstus, Pope Sixtus I would also use the Sixtus name during his time before joining the Church. Roman by birth, he began helping the Church at a young age. Records from that era are spotty and list several dates for when he became pope and when his papacy ended. Most historians believe that he held this role for a decade. Most records show that he became pope sometime between 115 and 117. He most likely took on this role around the time that Pope Alexander I passed away. The only real information we have about his early life is that his father was named Pastor.

Sixtus I ruled with a firm hand and used some of the traditions that his predecessors did. He believed that no one should touch or gain access to holy relics unless they were ministers. The pope also believed that bishops should take their Holy See responsibilities seriously and limit their contact with others when they returned home. He also created a rule that required priests to recite the Preface in Mass and then the Sanctus. Though he ruled for 10 years, some believe that he started his papacy before 120 and that his papacy ended as late as 128. According to the official Church records, Telesphorus became pope circa 125.

There is not an official cause of death listed for Sixtus I. Legends from this era claim that he was a martyr and that those against the Church murdered him simply because he was the pope. Though this might explain why he later became a saint, martyrs were not common during this era. It’s likely that he died of natural causes as he was in his early 80s at the time. Following his death, the Church had his remains buried on Vatican Hill, choosing a resting place close to his predecessors as well as Paul I. Vatican Hill is still there and now home to St. Peter’s Basilica, which has burial spots for other popes. Alban Butler, who was a priest in the Church during the early 120s, passed the relics from the pope to another man who gave them to a Church for display. The Catholic Church identifies Pope Sixtus I as a saint.

Quick Facts About Pope Sixtus I

Interesting Facts About Sixtus I