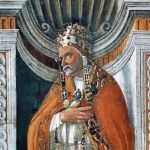 Sixtus II was the 24th pope and the second of four men to use the name Sixtus. Born in Greece, he was pope for just a short period before becoming a martyr for his position and beliefs. You can read about the beheading of Pope Saint Sixtus II and his life in this article.

Sixtus II was one of the early popes who came from Greece. He was likely born in Athens, Greece circa 215. Athens was then part of Achaea and the Roman Empire. Known by the name of Xustos, he was sometimes called Sixtos, which led to him choosing the name of Sixtus II when he became pope.

Pope Saint Stephen became the leader of the Church in 254 and held this position for more than three years. During his papacy, he oversaw issues relating to heretics. The Churches in Rome fought with churches in two other regions about whether heretics could return to the Church and have their baptisms done again. Sixtus II inherited a Church still fighting over heretics and quickly worked to bring them together. This helped keep the churches together. Pope Sixtus II refused to baptize heretics though as he believed that it went against the Church’s teachings.

Valerian became the Roman Emperor in 253 AD and ruled for nearly seven years. Just five years after becoming emperor, he increased his persecution of Christians. One of his earliest orders forbid Christians from gathering in cemeteries and called for the death of those caught violating the order. The emperor also forced Christians who did not agree with him out of the empire. Sixtus II attempted to work with the ruler until he issued a new decree, which called for the death of the highest rulers in the Church.

There are two different stories regarding the death of Pope Sixtus II. One story claims that he asked his bishops and other close associates to join him in a cemetery in Rome. It was here that he spoke his final words and encouraged others to continue following the teachings of the Church. This story claims that soldiers sent on the orders of the emperor approached him and beheaded him as he remained seated. Another version of his death claims that the emperor ordered the pope brought to court. He was given the chance to turn his back on the Church. When he refused, the pope was brought to the cemetery by soldiers and beheaded. Most historians believe that he was executed in the cemetery after a short trial.

A later historian claimed that Sixtus II was crowned rather than killed since he willingly gave his life for the Church. He was one of the few martyred popes who did not speak out against their death sentences. His beheading took place in the Catacombs of St. Callixtus, which is likely where his remains were buried.

*Sixtus II was known as Xustos and Sixtos when he was born in Greece.
*He was born circa 215 in Athens.
*Pope Sixtus II died on August 6, 258.
*The Church claims that he died as a martyr and was beheaded.
*His papacy began on August 30, 257.
*The papacy of Sixtus II ended when he died in August of 258.
*His successor was Pope Saint Dionysus who became pope on July 22, 259.

*There is some dispute among historians as to whether Sixtus II was Greek. Some believe that Xustos was a Greek philosopher who released a series of sentences during the same era and that records confused the two men. If this is true, Sixtus II may have been born in Rome.
*St. Cyprian wrote a letter to a bishop during the reign of Emperor Valerian that still exists today. Written in Latin, this letter outlines the order that led to the death of Pope Sixtus II.
*Pope Saint Sixtus II is one of the only popes in history who ruled for less than one year. His papacy lasted for around 341 days.
*The Catholic Church canonized Pope Sixtus II and celebrate his feast day on August 6-7 every year, which is his believed date of death. In the Eastern Christian Church, they honor Sixtus II with a feast day on August 10.
*Pope Sixtus II was martyred along with six deacons chosen by the emperor. Some believe that he willingly accepted his fate as he believed it would protect his followers.