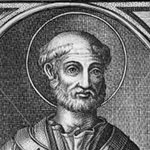 Pope Saint Soter was the 12th pope and likely ruled from either 162 to 168 AD or 170 to 177 AD. He was Greek and known for both creating the Easter celebration and for his martyrdom. You can keep reading to find out more about this former pope.

There is almost nothing known about Soter, who served as the 12th pope of the Church. He was born circa 119 AD in a small town in Italy and had Greek parents. Pope Saint Anicetus was the pope before him. The Church claims that Soter became the pope not long after Anicetus was martyred.

One of the main acts that Soter did as the pope was claim that marriage was a valid act when it was blessed by a priest. This meant that the only valid marriages in Italy at the time were those who exchanged vows in front of a priest.

As with other popes from this period, Pope Soter was forced to take a stand against the Montanist movement. This movement started in Asia Minor but had followers living in Rome by the early part of the second century. Pope Eleutherius was the first to claim that those followers were heretics as their beliefs differed from those of the Church. When Soter became the pope, he followed in his predecessor’s footsteps.

Another important thing that Soter did during his papacy was call for the annual celebration of Easter. He created an annual festival that took place during this celebration and asked all Christians to join him. Soter believed that his rulings on both marriage and Easter would directly challenge the followers of the Montanist movement. The pope believed that those men were wrong in their thoughts and even wrote a book that spoke out against the heretics. No copies of this manuscript survived.

Though we don’t know much about Pope Soter, we do know that he did several charitable acts during his papacy. He spoke out against the persecution of Christians, especially those suffering in the Middle East. One of the letters Soter wrote during his papacy exists because S. Dionysus of Corinth preserved a fragment of the letter in one that he wrote. The letter also talked about the pope as a good and faithful man who had a deep concern for others.

Though listed as a martyr, there is no historical proof that this is accurate. Soter was canonized in the Church and listed as an official martyr, even given a feast date. He died circa 174 AD while still living in Rome, Italy. Tradition holds that he was one of the many early popes who were martyred for their Christian beliefs. A revision of the General Roman Calendar from 1969 claims that there is no evidence that he or Pope Caius were martyrs. Within the Church, both are still listed as saints and martyrs, with Soter called Pope Saint Soter.