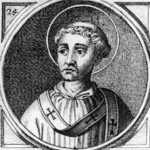 Pope Stephen I was the leader of the Church from 254 to 257 and the 23rd pope. As the Church later recognized him as a saint, he is sometimes referred to as Pope Saint Stephen I. He was one of several popes martyred, which you can read about in the following article.

The future Pope Stephen I was born to Greek parents who moved to Rome, Italy before his birth. He was born there and raised with the name Stephanos. After receiving his calling to help the Church, the young man began working in different roles and captured the attention of Pope Lucius I. Lucius would later make Stephanos a bishop and choose him as his official successor.

Papacy and Bishop of Arles

Following the death of Pope Lucius I on March 5, the Church quickly appointed Stephanos as the next pope. He chose the name Pope Stephen and quickly found himself dealing with the Bishop of Arles. This man created Novatianism, which was an early group of Christians. They believed that those who lapsed or left the Church and later repented did not deserve their full rites. The Bishop of Arles denied them communion, but some disagreed with his position and urged the pope to speak with him. Pope Stephen I also faced issues from some who worried that heretics and others might turn their backs on the Church, repent and return. The pope finally ruled that anyone who received baptism from another sect did not need to be baptized again. While the Latin Church agreed with this stance, some in the Eastern Christian Churches did not.

During his papacy, Stephen I helped restore bishops to churches in two different regions. The Christian persecution led to the removal of bishops from the churches in Astorga and Leon in Spain. There were claims that the men were unfaithful to both their positions and the Church itself. As they repented for their actions during their persecutions, the pope returned them to their positions.

Pope Stephen believed that all followers deserved help from the Church, which is why he used Church funds to help people living in Syria and other regions. They received large cash donations to rebuild their churches. He would also create a policy still used today that says the sacraments issued by priests, bishops and other religious leaders are always valid, even if those leaders were excommunicated. Legend claims that Stephen was martyred on the orders of Emperor Valerian. While holding Mass and speaking to his parishioners, the emperor’s soldiers approached him and beheaded the pope. The spot where he died became a popular attraction and remained on display up through the 18th century. Some historians now doubt that he was a martyr and believe that he did of natural causes.

Quick Facts About Pope Stephen I

*He was a Greek man known as Stephanos when he was born.
*His birth date is listed as circa 205 AD.
*He died on August 6, 258 in Rome, Italy.
*The Church recognizes Stephen I as a martyr who was killed by beheading.
*His papacy began on March 12, 257.
*The papacy of Stephen I ended with his death in 258.
*Pope Saint Sixtus II succeeded Stephen I and was also martyred.

Interesting Facts About Pope Stephen I

*Stephen I was one of several popes martyred for both their beliefs and positions within the Church. The persecution of Christians at the time was so great that his successor also became a martyr. Historians now call this one of the worst persecutions in history.
*Both the Catholic Church and the Eastern Orthodox Church canonized Stephen I. His feast day is August 2 in the Catholic Church and August 3 in the Eastern Orthodox Church.
*The Letters of Dionysius of Alexandria are important historical artifacts. They include letters written by the Bishop of Alexandria to both Pope Stephen I and Pope

*Though the pope believed that those who repented did not need baptizing again and that followers could be baptized by other sects, not everyone agreed with him. There is still some debate among associated churches on this.
*Stephen I was one of the only popes named by a predecessor. Pope Lucius I had experience working with Stephen and believed that he would do a good job with the papacy. Just days after his death, the Church named Stephen as the next pope. While other popes named their successors, the Church had no obligation to follow their wishes and usually denied their requests.