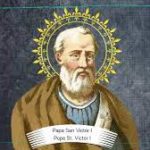 Also known as Pope Saint Victor, Pope Victor I was the 14th leader of the Church. He was a Berber who held the papal throne for more than a decade and known for excommunicating a Christian writer and coming from Africa. You can find out even more about Pope Saint Victor in this article.

Born in Africa, Victor was the son of a man named Felix and an unnamed mother. He continued to use his given name after becoming the pope and inspired two other men to also use the name, Victor. Before becoming the pope, Victor was a bishop. He likely worked in Leptis Magna, which was an ancient city in the Carthage region. He may have spent some time in Tripolitania too. The Church does not know much else about his early life.

There is some dispute over Victor’s papacy and when it began because the Church doesn’t have many official records from this period. One biography about popes claimed that his papacy began sometime in 186 AD. Most now believe that he became pope in 189 AD and that he ruled for more than 10 years. If any of the other records are accurate, his papacy lasted for up to 12 years. He became pope after the martyrdom of Pope Saint Eleutherius.

One of the main acts associated with Pope Victor is the work he did to free the persecuted. The emperor at the time was against Christians and sent them to work in the mines in Sardinia. Victor believed that those men deserved the right to their freedom and demanded their release. He then welcomed them back into the Church.

During the second century, many people in the West celebrated Easter on Sunday. In the East, they chose different days to celebrate this holiday. Victor unified all the churches when he declared that they should celebrate Easter on Sunday, which is a practice that the Church still uses. The pope initially attempted to excommunicate those who celebrated Easter on different days or prevent them from attending Church. It was only after a bishop from Gaul encouraged him to think about his followers that Victor set the new day for Easter.

Known as Theodotus the Fuller and by other nicknames, Theodotus was a Christian author known for his controversial writings about Jesus Christ. He claimed that Jesus was a mortal man born to a normal man and woman who later found his way to God. Theodotus also claimed that Jesus did not become God until his resurrection. The writings drew such ire that Victor claimed the man was a heretic and excommunicated him.

Early Church records indicate that Pope Victor I was a martyr, which is one of the reasons why he is recognized as a saint. Each of the 13 popes who came before him were martyrs, and several later popes were also martyred. It makes sense that Victor was also martyred as he was the leader of the Christians who faced opposition from many. No records exist to show where he was buried or what happened to his relics.

Quick Facts About Pope Victor I

Interesting Facts About Pope Victor I

*Victor was the first pope born in Africa. In Church documents, his ethnicity is listed as Roman Berber.
*The popes who came before Victor used Greek when writing documents and hosting Mass. Victor made the transition to Latin, which other popes would also use.
*As he came from North Africa, some historians now believe that Victor was a black man. There is some dispute as to whether two future popes from Africa were black. Illustrations of Pope Victor show him as a white man.
*Pope Saint Victor has a feast day in the Catholic Church on July 28. Some think that the records list this as his death date because it is his feast day.
*The illustration of the pope shown in a biography depicts him standing and wearing the papal robes that have crosses on his shoulders. He also has a serene halo around his head.