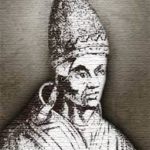 Pope St. Vitalian served as the bishop of Rome during the years of 657 A.D. until his death in 672 A.D. During his nearly 15 year long papacy, Vitalian’s tenure became overshadowed by a running dispute between the imperial authorities in the East in Constantinople and the papacy in Italy. This dispute centered on Monothelitism that Rome soundly condemned. Though the dispute was troubling, Pope Vitalian attempted to resolve the schism amicably and remained on friendly terms with Eastern Emperor Constans II.

Election of Pope St. Vitalian to the Papacy

Vitalian was born to Anastasius in Segni of the Lazio region. Once his predecessor Pope Eugene I died in the first three days of June in 657 A.D., the church in Rome selected Vitalian to be his successor. On July 30 of 657 A.D., Vitalian received the election and kept his birth name for his pontificate.

Pope Vitalian’s Relations with the Eastern Empire and Church

Pope Vitalian attempted to be a peacemaker as pope like his predecessor Pope Eugene. St. Vitalian attempted to rebuild the ancient ties to Constantinople through friendly efforts with Eastern Emperor Constans II all the while attempting to see a settlement of the Monothelite controversy. The emperor affirmed St. Vitalian’s election to the papacy as the titular head of the Church. He made a present to the new pope of a codex containing the gospels that was expensively ornamented with rare gems and covered by golden trappings.

Pope Vitalian had his chance to return the kindness and largess when the Eastern Emperor arrived in Rome in the year 663 A.D in order to participate in a campaign versus the barbarian Lombards. The emperor brought still more gifts with him for the pope when they at last met in person in Rome.

After taking leave of the pope and the campaign against the Lombards, Emeperor Constans II stopped in Sicily and oppressed the locals. In 668 A.D. the Eastern Emperor saw assassination in Syracuse. Pope Vitalian threw his support behind the son of Constans, becoming a key pillar in helping Constantine IV to prevail over his arch-rival Mezezius. Thanks to the pope’s serious efforts to cultivate the imperial favor and his defense and support of Constantine IV against the usurper Emperor Constantine IV returned to orthodoxy that his father had abandoned years earlier.

The Pontiff’s Relations with the Western Church

Pope Vitalian managed to significantly boost church relations with island nation England. During the Synod of Whitby, Northumbrian overlord King Oswy agreed to the dates for Easter celebrated by the new pope in consultation with the Patriarch. Pope St. Vitalian also dispatched a highly intelligent and educated Theodore of Tarsus to be the king’s latin tutor and Greek tutor.

When Archbishop Marius of the Sea of Ravenna separated himself from the authority of the pope directly under the patronage of the Eastern Emperors, Constans II backed Marius with his edict that withdrew the Archbishop seat of Ravenna from the ecclesiastical Roman jurisdiction. Future archbishops of Ravenna obtained their pallium directly from the Eastern Emperors. Not until the papacy of Pope Leo II was the see of Ravena put down as an independent force and returned to the nominal authority of the bishop of Rome.

The papacy of St. Pope Vitalian was overshadowed by the long-running disputes between Imperial government in the East and the pope’s spiritual and sometimes political authority in nearly all of Italy.

The pope condemned the heresy of Monothelitism which was officially practiced by some in the East and the Imperial court.

Pope St. Vitalian supported the physical son of Constans II over usurpur Mezezius and so made a definite mark on the authority prescribed to the papacy even in the Eastern Imperial court.

The introduction of church organ music in the West especially is traditionally remembered to have dated from the time of the pontificate of Pope Vitalian.

On a visit to England, Pope St. Vitalian improved relations with England dramatically in the Synod of Whitby where the King Oswy of Northumbria claimed to hate Rome but took on money from the British which is soon to be sent to help with the many, many costs here

Under the reign of St. Vitalian the Archibishops of Ravenna succeeded from Papal Authority in the West.