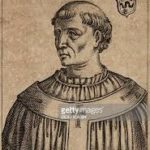 Pope Zachary (birth name Zacharias) was the last pontiff of the Greek popes. According to church tradition, Zachary served as a Roman deacon when chosen to succeed his predecessor Pope Gregory III in 741 A.D. The pontificate of Pope Zachary focused on helping to save the people of Italy from barbaric invasions and on maintaining diplomatic relations with Frankish and Lombard kingdoms as well as with the Eastern Roman Empire (Byzantine Empire).

Zachary was a man of Greek ancestry born in Santa Severina in Calabria, Southern Italy within the Eastern Roman Empire. As a deacon in the Roman Church, he signed the Roman council decrees of 732 A.D. The church chose Pope Zachary to follow Pope Gregory III on either December 3rd or 5th of 741 A.D.

During the pontificate of Pope St. Zachary he began a policy of working with the invading Lombards at the same time as he balanced keeping them from conquering the Eastern Roman (Byzantine) exarchate of Ravenna. Pope Zachary was so successful in this complicated endeavor that he was able to reach a peace with the Lombards. At the same time he kept a friendly working relationship with the Eastern Roman Emperor Constantine V Copronymus. Pope Zachary counseled the emperor to restore icon veneration in the church.

The relations that Pope Zachary established with the Franks were also peaceful, lasting, and important. St. Zachary corresponded with St. Boniface from Germany and demonstrated papal influence on the Frankish kingdom and its events of the time. Zachary appointed St. Boniface to be the church legate with a mandate to reform the entire Frankish church.

Pope Zachary was also involved in Frankish succession politics. He gave his support to deposing Childeric III while authorizing the church in the Frankish kingdom to consecrate Pippin III the Short to be the new king of the Franks.

Pope St. Zachary had a number of important accomplishments that contributed to his lasting positive legacy. His decision to transfer the Frankish crown from the Merovingian dynasty to the Carolingians started a new dawn in papal and state relations through his founding of the Frankish Carolingian and papal alliance. This would become a hugely significant basis for later affairs concerning the pontiffs and the Frankish emperors.

Pope Zachary also built, renovated, and converted important churches and buildings in the Eternal City. He constructed the first Santa Maria Sopra Minerva Church atop the ancient Roman Minerva temple found close to the Pantheon. He rebuilt the crumbling Lateran Palace as well.

An example of the goodness of Pope St. Zachary surrounds the practice of slavery. When merchants from Venice purchased a large quantity of slaves in the Eternal City with the intention of selling them to the African Muslims, the pope intervened dramatically. Zachary forbade them to practice human trafficking, bought the slaves from the merchants, and freed the slaves.

– Born – 679 A.D. in Santa Severina, Calabria, Italy in the Byzantine Empire
– Birth Name – Zacharias
– Died – March 15, 752 A.D.
– How he died
The saintly Pope Zachary died at the advanced age of from 72 to 73 years old in Rome within the Kingdom of the Lombards. The church laid him to rest in St. Peter’s Basilica after his death that took place around March 15th of 752 A.D.

Pope St. Zachary engaged the Lombard King Liutprand in diplomacy directly so effectively that out of respect for the pope the Lombard king gave back all church territory and captives seized from Rome (without having to pay their ransom).

The Exarch of Ravenna appealed to Zachary for help with an intended Lombard attack on Ravenna, and Zachary convinced the Lombards to give up the attack on and return captured territories to the city.

Pope St. Zachary showed himself to be a capable, excellent, charitable, and active pontiff.

The church chose Stephen to succeed Pope Zachary, but Stephen only outlived St. Zachary by a few days.

The Eastern Church remembers Pope Zachary for his translating into Greek the Dialogues of Pope Gregory the Great.