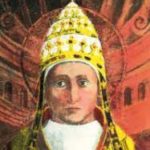 Pope Zephyrinus was the 15th pope of the Church and chose the name Zephyrinus in honor of his birth name. With a reign that lasted for more than 18 years, he had one of the longest papacies in the early history of the Church. The pope faced opposition from many people and underwent extreme suffering, which is why he’s recognized as a martyr. You can use this article to learn about his long tenure and eventual martyrdom.

The Church knows almost nothing about the early life of Zephyrinus. He was born circa 160 AD and spent his early days and later years in Rome. Historians believe that he was likely an administrative worker and did not have the formal training and education that other popes had. This was due to Hippolytus who claimed that the pope was a simple man. Natalius would step up at some point in 199 and become the antipope.

Zephyrinus faced opposition from the antipope and others at the time. Though he had a strong understanding of the Church and its policies, he didn’t have as much experience talking to the public. One of the earliest things he did was offer to support the future Pope Callixtus. Callixtus was a slave at the time and sent to work in the mines after his second arrest. When he heard of the man’s sufferings, the pope offered to give him a pension until he could get back on his feet again.

As the pope, Zephyrinus was forced to deal with Emperor Severus who was against the Church’s teachings. The emperor engaged in the persecution of Christians for more than a decade after Zephyrinus became the pope. He became known as a defender because of how often he spoke out against heretics and others. The emperor would eventually release a decree that forbid the Church from converting others.

The End of the Antipope

The issues between the pope and the antipope came to an abrupt end when Natalius was persecuted by the emperor and his men. He claimed that he had visions where angels warned him about his beliefs and encouraged him to return to the Church. After a harrowing dream in which angels beat him for several hours, he repented for his sins and begged the pope to forgive him. This was likely one of the last things that Zephyrinus did before he died.

Zephyrinus was not a martyr in the traditional sense of the world. Rather than killing him for his beliefs, his opponents made his life extremely difficult, which led to his death at around the age of 57. The Church built a special place for his body in the Cemetery of Callixtus and had his body sent there a few days after his death.