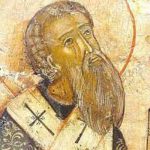 Pope St. Zosimus served as the bishop of Rome and head of the Western church for the year from March 417 A.D. until December of 418 A.D. He succeeded Pope Innocent I in the role of head of the papacy, receiving consecration on March 18, 417 A.D. The short but chaotic rule of St. Zosimus became embroiled in a wide range of conflicts from Africa to Gaul centering on the heresy doctrine called Pelagianism.

In the first act of the newly consecrated Pope Zosimus he appointed the Arles’ Bishop Patroclus to be his papal vicar to Gaul. This sparked a crisis that quickly involved every church in the Roman province of southern Gaul (modern day southern France). Important bishops who lined up to oppose this appointment of Patroclus included the bishops of Marseille, Narbonne, and Vienne. Pope Zosimus responded to this challenge against his leadership by threatening to excommunicate them all.

At the same time a controversy called Pelagianism embroiled the new pope. The Pelagians believed that God’s divine grace played a minimal part in the salvation of people. Zosimus’ predecessor Pope Innocent I had already excommunicated Pelagius the author of this controversy back on January 27, 417 A.D.

The Pelagians were also condemned by the bishops of Roman Africa province. They appealed directly to Rome and were effectively (and ultimately successfully) represented by the arguments of Celestius. Pelagius made his profession of faith to the bishop of Rome, prompting Pope Zosimus to write a harsh letter to those bishops in Africa in September of 417 A.D. The pope accused them of having moved too quickly to condemn Pelagius and his followers in the province.

In 418 A.D., Pope St. Zosimus read the commentary on the Biblical book of Romans that Pelagius wrote. The pontiff was stunned by the doctrine Pelagius had expressed and summoned his representative Celestius to come back to the papal palace for an explanation and examination. Celestius responded by fleeing the Eternal City, making him look guilty.

Pope Zosimus then issued his Epistolary Sermon in which he excommunicated both Celestius and Pelagius. His doctrines condemned, Pelagius left Italy and most likely headed to Roman Egypt beyond the reach of the pontiff.

By his confirmation of predecessor Pope Innocent’s judgment on the Pelagians Pope Zosimus should have settled the controversy in the Western church. Instead, he stirred up yet another controversy in the episcopate of Africa through his backing the case of one Priest Apiarius who had been found to be disreputable. The Sicca Veneria Bishop Urbanus had excommunicated Apiarius previously, yet Pope Zosimus interfered in the normal procedures of canon law in the province of Africa. He sent letters containing orders to change the basis of appealing church disputes between the province of Africa and Rome. Pope Zosimus then threatened to issue an excommunication against Bishop Urbanus if he did not reconcile affairs with Apiarius.

Members of the Roman clergy did not agree with the intervention in African canon law and procedures that the pope was carrying out. They went around Pope Zosimus and made their appeals directly to the Western Roman imperial court sitting in Ravenna (capital of the Western Empire at this point). Zosimus responded by excommunicating all clergy members who went behind his back to the Western Roman Emperor. The case was still not settled when Pope Zosimus unexpectedly died.

– Born – unknown date of birth in Mesoraca, Calabria, Southern Italy
– Birth Name – Zosimus
– Died – December 26, 418 A.D.
– How he died
In a destructive conflict between Pope Zosimus and Bishop Urbanus, the pontiff excommunicated clergy men who appealed to the imperial Roman court. Shortly after these actions, Zosimus suddenly died. The church buried him in a grave whose location is unknown within the Basilica of St. Lawrence (Outside of the Walls) in Rome.