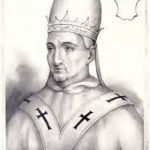 Pope Stephen II served the papacy during an era of remarkable and permanently lasting change from years 752 A.D. through 757 A.D. During his reign, he ended the direct ties to the Byzantine (Eastern Roman) Empire and received the donation of the Papal States from Pepin the Short, King of the Franks. This made Pope Stephen II the first head of the papacy to be a temporal prince over an enormous feudal territory stretching from the Adriatic Sea to the Tyrrhenian Sea.

When Stephen received his election to the papacy on March 26, 752 A.D., he was serving as a deacon in the Roman church. This aristocrat from the Eternal City succeeded Pope Zachary a day after the original successor (another Stephen) died without having received his consecration to the papacy. The most lasting act of Stephen II’s pontificate involved breaking the Holy See away from its direct allegiance to the Byzantines and instead closely allying it with the rising power of the Franks.

Pope Stephen II did not deliberately set out to break with the Byzantine Emperor Constantine V, but he acted on advice from the Eastern emperor that he should find another Germanic tribe to match up against the invading Lombards. King Aistulf of the Lombards was in the middle of a campaign to subdue the whole of the Italian peninsula, and he threatened Rome. Pope Stephen II begged the Eastern imperial court for troops to defend the Eternal City and push back the Lombards, but Emperor Constantine V faced dual threats in the arrival of the Bulgars to the north and the potent expansion of the Islamic Abbasid Caliphate to the south.

Pope Stephen II and the Ongoing Struggle Against the Lombards

Pope Stephen II failed in his attempts to persuade Lombard King Aistulf to withdraw from the Duchy of Rome during the fall of year 753 A.D. He then crossed the Alps to meet with Frankish King Pepin III (the Short). Pepin made a deal with Stephen II to recover the lost Catholic Church lands that the Lombards had seized and to return them to the pontiff. In response to this powerful offer of help, Pope Stephen II consecrated both King Pepin III and his two sons Carloman and Charlemagne the Kings of the Romans.

Pepin fulfilled his vow to help the papacy and mustered his Frankish nobles and armies. The Frankish forces met Aistulf and besieged the Lombard king’s forces in Pavia, Italy. Stephen was able to return to the papal palace in Rome the next October. Yet once Pippin’s army withdrew across the Alps back to Gaul (France), King Aistulf continued his conquest of Italy. The Lombard forces had Rome surrounded in January of 756 A.D. as they intended on basing their new capital in the Eternal City.

The pope dispatched another urgent message begging for help from the Franks. In response, King Pepin again returned to the Italian peninsula with his warrior sons Charlemagne and Carloman in the year 756 A.D. This time they crushed the Lombards and drove them out of a wide swath of Central Italian lands that Pepin III gave to Pope Stephen II. Lands including the duchy of Rome, the exarchate of Ravenna, and the provinces of Istria and Venetia made up the early basis of the new Papal States directly ruled by Stephen II and his successors.