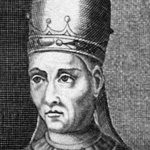 Pope Stephen IV came from noble birth and an important family with a tradition of producing popes. After he succeeded his predecessor Pope Leo III in June of 816 A.D. the new pope forced the citizens of Rome to offer their allegiance to the Frankish King Louis. Most of the incredibly brief papacy (about six months long) of Pope Stephen IV centered on his trip to meet with and crown the Frankish sovereign in Gaul (modern day France).

Early Life and Election to the Papacy of Pope Stephen IV

Stephen was born son to a Roman nobleman named Marinus in a family that had seen other members seated as Pope Sergius II as well as Pope Adrian II. Under the reign of Pope Adrian I, Stephen IV found himself growing up in the papal Lateran Palace. He became first a sub deacon and then later a deacon during the pontificate of Pope Leo III.

Owing largely to his popularity with the people of Rome, Stephen found himself chosen to succeed his predecessor Pope Leo as the new head of the Western Church. It only took ten days following the passing of Leo III for Pope Stephen IV to be consecrated around June 22nd of 816 A.D.

Before Holy Roman Emperor Charlemagne had died, he crowned his son and heir as Louis the new king of the Franks in the year 813 A.D. The new Pope Stephen IV received an invitation from King Louis to attend him in Gaul (France), and Stephen IV departed from Rome in August of 816 A.D. The Frankish ruler ordered King Bernard of Italy his nephew to attend Stephen IV so the pair made the crossing of the Alps Mountains in each other’s company.

New pope and recently crowned Western emperor met in person in Rheims during the early part of October. In a noteworthy gesture that helped to earn him the title of “the Pious”, King Louis bowed all the way to the ground three individual times in front of Pope Stephen. On October 5, 816 A.D. Pope Stephen IV held a coronation ceremony in which he placed a crown (that according to legend had belonged to the famous Roman Emperor Constantine the Great) on King Louis’ head. The pope also crowned Louis’ wife Ermengarde of Hesbaye as empress and greeted her as Augusta.

Legacy of the Pontificate of Pope Stephen IV

In renewing the tradition and arrangement between pontiff and king of the Franks, Pope Stephen IV solidified the Holy See’s cherished privilege to “create” Holy Roman Emperors. The Roman church also had its privileges within the empire confirmed along with its still-infant Papal States’ territories.

Pope Stephen IV made several other arrangements in his brief pontificate. He raised to archbishop rank the Bishop Theodulf of Orleans, and obtained the release of all political exile prisoners of Rome from King Louis the Pious. These unfortunate victims of the conflicts in the early stage of the reign of Pope Leo III were returned to the custody of Pope Stephen by the Holy Roman Emperor Louis.

Pope Stephen came from the family that had seen several of its members ascend to the papacy as Popes Adrian II and Sergius II.

Speculation has existed that he was so quickly elected to be the pontiff as part of a Roman clergy plot to stop the Frankish King Louis the Pious from interfering in the papal succession and choice.

As soon as he gained the papal throne, Stephen IV ordered all of the Roman citizens to swear their allegiance to the recently crowned Frankish King Louis.

In a later ceremony, Pope Stephen IV crowned Louis the Pious as Holy Roman Emperor using a crown that supposedly belonged to the legendary Roman Emperor Constantine the Great.

After the return of Pope Stephen IV to Rome, he broke with the policy of his predecessor (Leo III) who had preferred the clergy to the lay aristocracy.