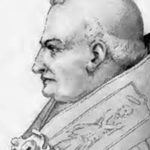 Pope Stephen IX was the 154th man to sit on the papal throne. While his reign was not long, he did have an impact on the Church. He enforced many policies that changed the way the Church ran, improving its reputation and restoring its moral compass.

He belonged to a powerful family that influenced politics at the time. Pair that with his dedication to service and Pope Stephen IX was a well-respected man who was highly motivated in faith and regional politics.

Before rising to the pontificate, the future Pope was known as
Frederick of Lorraine. He was born in the Duchy of Lorraine, which is modern-day France.

Frederick belonged to the Ardennes-Verdun dynasty. His brother was Duke Godfrey the Bearded. While his family had strong political ties, Frederick chose to join the Church instead.

He studied at St. Lambert’s Cathedral in Liège and eventually became an archdeacon. Later, he was appointed cardinal-archdeacon of Santa Maria in Domnica by his cousin, Pope Leo IX. Thanks to the familial ties, he became the chief papal advisor and part of the Pope’s inner circles. He was part of the group that started the movement for Gregorian Reform.

Later, Frederick was appointed cardinal-presbyter by Pope Victor II. Then, he was made abbot of Monte Cassino.

It only took about five days after the death of Pope Victor II to elect Pope Stephen IX. Almost immediately, the Pope would enforce the Gregorian Reform policies, which he was a part of. Is was zealous about a few guidelines in particular. This included clerical celibacy and the denouncement of simony.

Beyond that, the Pope’s achievements were limited despite his best efforts. Another notable act was his attempt to remove Normans from Southern Italy, as he feared they would advance North.

He sent Cardinal Hildebrand, who would become Pope Gregory VII, as a papal delegate to speak to the Byzantine Emperor. Unfortunately, Pope Stephen IX fell ill and died suddenly. He perished before his representatives even made it to a Byzantine-held city, causing them to turn back and abandon their cause.

Pope Stephen IX was buried in the Crypt of Santa Reparata in Florence, Italy.

-Pope Stephen IX enforced policies in the Gregorian Reform, which involved clerical celibacy.
-He was only Pope for roughly 239 days.
-Shortly before his death, he attempted to halt the Norman advance on Italy. However, he died before he could accomplish his goals.
-According to some accounts, Pope Stephen IX played a role in the events that would ultimately create the East-West Schism before his papacy.
-After his death, Antipope Benedict X took over. At the time, Benedict X was considered his successor. But, Benedict X’s later classification as an Antipope changed this, making his official successor Nicholas II.
-He is sometimes referred to as “Pope Stephen X.” This confusion is due to the early death of Stephen I. Stephen I was Pope-elect but died before his consecration. As a result, there is confusion with all of the Popes named “Stephen.”