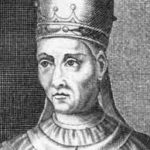 Pope Stephen V served for six years as the head of the Western Church during the chaotic and tumultuous era of 885 A.D. to 891 A.D. During his troubled pontificate, Stephen V witnessed the Carolingian Frankish empire’s crumbling, famines and Islamic raids on Italy, and ongoing struggles to seize the crown of Italy.

Pope Stephen V was born to a noble family in Rome. Pope Marinus I made him a cardinal, and then the church unanimously chose Stephen him to succeed his predecessor Pope Adrian III on May 17, 885 A.D. The church fathers consecrated Stephen V on July 15th, but the Holy Roman Emperor Charles III (the Fat) would not accept him as pontiff at first. Charles even sent a legate to overthrow (and possibly assassinate) Pope Stephen V. King Charles finally assented to Stephen’s choice as pope in September when he realized that the election had been canonical. Two months later in November of 887 A.D. the East Franks led by King Arnulf overthrew Charles the Fat and the Carolingian Dynasty that the popes had been allied to for generations.

Pope Stephen V pursued a papacy of complete independence and unprecedented authority with his whole world crumbling on all sides. The new pope would not recognize the Eastern imperial choice of Patriarch Photius of Constantinople. Stephen encouraged then Byzantine (Eastern Roman) Emperor Basil I (the Macedonian) to get rid of Photius. After Emperor Basil died, Pope Stephen again put this request to Basil’s son Emperor Leo VI (the Wise). Leo responded by exiling Patriarch Photius in the year 886 A.D.

At the same time, the Islamic Saracens were again attacking the mainland of Italy. Pope Stephen V appealed without success for Emperor Leo to send him troops and ships to drive away the foes of Christendom.

Later Years of the Papacy of Pope Stephen V

The chaos continued in the second part of the papacy of Pope Stephen. Italy was suffering continuous attacks by Saracens from the south and Hungarians out of the north. Infighting among the various nobles struggling for the rule of Italy only made matters worse. Pope Stephen V appealed to the Eastern Frankish King Arnulf to bring order to Italy as the pontiff had no resources equal to the task. Arnulf would not come down to Italy during the papacy of Stephen V though until Stephen’s successor Pope Formosus repeated the request for help again in year 894 A.D.

Duke Guy (Guido) of Spoleto crowned himself as King of Italy (and the French) in 889 A.D. in the ongoing chaos. The next year saw Pope Stephen V accept King Louis III (the Blind) as the new king of Provence (southeast France). Pope Stephen had attached himself to King Arnulf as the best hope for saving Italy from destruction yet found himself with no choice but to crown Duke Guy as the Holy Roman Emperor on February 21, 891 A.D.

Between famines, attacks on Italy, and churches in need of repair, Pope Stephen V found his papal treasury completely exhausted. To help the poor, ransom the captives taken by the Saracens, and repair the churches, Pope Stephen fell back on his family wealth. The pope’s decision to prohibit the local Slavic liturgy in the Moravian Church caused the Slavs to mass adopt Eastern Church Christianity that the Slavic countries still follow to this day (Orthodox Christianity).

Pope Stephen died after receiving many envoys and pilgrims from England. The church buried him in the portico of St. Peter’s Basilica after his death on September 14, 891 A.D.

The father of Stephen V was Roman aristocrat Hadrian.

Pope Stephen V proved his noble generosity when he used his own family fortune to help relieve the poor among the people of Italy and redeem captives after a famine broke out and the Papal treasury was empty.

Because Steven V would not endorse the liturgy being permitted in the local Slavic languages he pushed the Slavs into choosing Eastern Orthodox Christianity over Catholicism.

Out of fear of the consequences for refusing, Pope Stephen V crowned as Holy Roman Emperor Duke Guy of Spoleto on February 21st of 891 A.D.