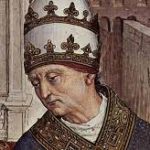 Stephen VI was the Roman born pontiff who ruled the papacy from May of 896 A.D. through August of 897 A.D. The successor of Pope Boniface VI saw the Catholic Church ripped apart by infighting factions of Roman aristocratic families and the ruling nobility of Spoleto, Tuscany, Benevento, and Naples. Pope Stephen VI was a member of the ruling family from the Duchy of Spoleto. He set about exacting revenge and engaging in brutal partisan politics immediately upon being elevated to the head of the Western Church in Rome.

Stephen was born to a father named John in Rome. John served the church as a priest, and Stephen later followed in his father’s footsteps by entering the church and receiving appointment to the bishopric of Anagni from Pope Formosus. Scholars have debated if this appointment was forced upon him.

The Duke Guy of Spoleto had received the crown of the Holy Roman Empire from Pope Stephen V while Guy’s son Duke Lambert received the crown as co-emperor from Pope Formosus. In the year of 896 A.D. Pope Formosus changed his mind and crowded the King Arnulf of the East Frankish as Holy Roman Emperor. This set off a raging storm between the various fighting factions in Italy. Stephen’s predecessor Pope Boniface served as pontiff for only two weeks before he was deposed by a rival faction. The Spoletan party managed to get Bishop Stephen installed as pontiff and seized control of Rome this way.

Pope Stephen was in the faction of the now-deposed Emperor Lambert who stirred the new pope to engage in what has been appropriately called among the darkest moments in the entire history of the papacy. Pope Stephen VI convened what history remembers as the Cadaver Synod.

Enraged by the actions of Pope Formosus (while in office) of abandoning their Emperor Lambert, the Spoletans conducted this synod of 897 A.D. where they disinterred the corpse of the former pope and had it arraigned for a trial nine months after this former pope had been buried. The Spoletan Pope Stephen VI and his faction accused the late Pope Formosus of various imagined crimes. The spirit of the trial sought to exact revenge for the slighting of their faction’s Holy Roman Emperor Lambert. The end goal was to destroy the faction that backed Pope Formosus.

Pope Stephen VI arranged the corpse of the former Pope Formosus in the papal throne in papal dress and began annulling the pontificate of Formosus along with all of his acts in office. Stephen finished the trial off with a horrific spectacle as he gave orders that the corpse of Pope Formosus be dragged around the Roman streets before being unceremoniously thrown into the Tiber River.

Once Pope Stephen VI had been deposed and had died, his Spoletan faction found an eventual successor in the murdering Pope Sergius III. This began a reign of terror full of intrigue, bloodshed, and fear in a subsequent 12 year period.

– How he died
After the conclusion of the Cadaver Synod, Pope Stephen VI suffered a popular revolt that saw him deposed from the pontificate. Without the protection of his papal office and insignia, Stephen VI was thrown into prison where he was strangled to death.

Stephen VI was a willing tool and family member of the faction from the Duchy of Spoleto.

Pope Stephen VI has been notoriously remembered for directing the infamous Cadaver Synod.

As head of the Catholic Church, Stephen VI committed an atrocity against his papal predecessor by dragging Pope Formosus’ corpse through the streets of Rome and having his body thrown in the Tiber River outside of Rome.

Pope Stephen VI fell from the pontificate over his horrific handling of the affair with Pope Formosus as a popular insurrection occurred in Rome.

Enraged partisans of Pope Formosus jailed Pope Stephen VI before strangling him to death in prison.

After Pope Stephen VI’s death, his successor Pope Romanus found the dishonored body of Pope Formosus and secretly buried it on the banks of the Tiber River.