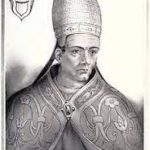 Pope Stephen VII served as the temporal ruler of the Papal States and pontiff in Rome in the years from February of 929 A.D. until he died in 931 A.D. While in the role of St. Anastasia’s cardinal priest, Stephen was an active participant in the Roman church administration before he became consecrated as the successor to Pope Leo VI in early 929. As he was a candidate put forward by the notorious Marozia the pope’s reign happened in the era that is today referred to as the Saeculum obscurum.

A Roman in his birth, Pope Stephen VII was born to a father named Theodemundus. While serving as the St. Anastasia cardinal priest in the city of Rome, Stephen became the personally chosen candidate of the real power in Rome at the time, Marozia the Senatrix of Rome. This pope served in the era known as the Saeculum obscurum in which the true ruler of the Eternal City was the faction of the powerful Marozia. History remembers that Pope Stephen VII was ultimately only chosen as a temporary candidate until Marozia’s son John was old enough to take on the role of the papacy. Marozia was a member of the powerful house of Theophylact, and she dominated the papacy for years.

While serving as the bishop of Rome, prince of the Papal States, and head of the Catholic Church, Pope Stephen VII managed to carry out a few acts and policies despite being an appointee of the Roman Senatrix Marozia. Stephen VII increased the French and Italian monasteries’ privileges. He felt beholden to Cante di Gabrielli for freeing him from one Huge of Arles and his oppression, and so the pope gave Gabrielli the post of Gubbio province’s papal governorship. This included absolute control over many different important fortresses.

Pope Stephen VII has been remembered for how harshly he dealt with clergy members who abandoned their core morals. One unsympathetic Greek source of the 1100s recorded that Pope Stephen VII became the first head of the papacy that carried himself unshaven while he served as the pontiff. Other than these papal acts and characteristics, almost nothing is known of the reign of Pope Stephen VII. When the pope passed away around the middle of March in 931 A.D., the Senatrix of Rome had her way. She ensured that her son John XI became the next bishop of Rome and head of the Catholic Church.

Pope Stephen VII perished potentially as a result of an assassination. He died about March the 15th of 931 A.D. Pope John XI the son of Marozia succeeded Pope Stephen.

Stephen VII was an active and able administrator of the Roman Church during the years before he received the appointment to the papacy.

Pope Stephen VII was recalled by his contemporaries as a severe ruler in dealing with members of the clergy who departed from their morals.

Stephen was the pope who first carried himself around unshaven while serving as the bishop or Rome and pontiff.

The possible end of Stephen VII involved being assassinated.

The son of Marozia, John XI, succeeded Pope Stephen VII after he passed away.