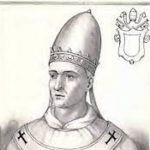 Pope Stephen VIII was the 127th man elected to rule the Church. Despite rising to the papal throne, the Pope had no real power. His papacy occurred during a time when powerful aristocrats influenced the Church and the Papal States. As a result, he was not able to distinguish himself or create any meaningful change.

His reign was short and relatively uneventful. Most of the noteworthy events that occurred during his tenure revolved around the noblemen’s political activities that took control of the Church.

According to most accounts, the future Pope was born Stephanus. He was born to a Roman family in the Papal States and became involved with the Church at an early age. His exact positions are lost to history, but he was involved with the church of Saints Silvester and Martin to some extent.

Eventually, he rose to the position of Bishop. He became Bishop of Rome before his election.

Pope Stephen VIII was elected after the death of his predecessor, Pope Leo VII. His election is surprising, as he had no familial connection to the Counts of Tusculum, who practically rules Rome and the Church at the time.

Even still, Pope Stephen VII did not have much say in how the Church or the Papal States were ruled. He was at the whims of the Counts of Tusculum and Alberic II of Spoleto, who belonged to the powerful family. Alberic II was the real ruler of Rome, dominating papal policies throughout the Pope’s tenure.

The only notable events to occur involved King Louis IV of France. He supported the King during a situation in West Francia. The Pope instructed papal legates to inform Frankish nobles that they were to accept King Louis IV and recognize his rule. Otherwise, they would be excommunicated.

This act resulted in the expulsion of Frankish bishops who supported King Louis IV’s enemies. Eventually, the Frankish nobles would notify the Pope that they pledge fealty to the King.

Pope Stephen VIII’s reign came to an end at the behest of Alberic II. King Hugh of Italy besieged Rome, leading to dissent. There were even assassination attempts against Alberic II from within the Church. Fearing even more conflict, Alberic imprisoned and beheaded potential enemies.

According to some accounts, Pope Stephen VIII was maimed and/or imprisoned by Alberic II and his supporters. He died after his imprisonment.