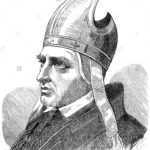 Pope Sylvester II was the leader of the Catholic Church from 999 A.D. through 1003 A.D. This first French pope is widely admired for his advances in education, his scholarly and scientific accomplishments, and his calculating political discernment. An admired educator and leading scientist in his own time, Sylvester II proved that Catholic Christianity was compatible with humanism and reasoning a thousand years ago.

Sylvester II was born with the given name of Gerbert to a humble family living in the Medieval French province of Auvergne near Aurillac. His education took place in arithmetic, grammar, and music at Saint-Gerald under the mentorship of Raymond Lavaur, a later abbot of Aurillac.

In 957 A.D. Gerbert went to Spain under the care of Count Borrell of Barcelona. He stayed there studying in the monastery Santa Maria de Ripoll for three years. Gerbert’s subjects of study included astronomy, geometry, math, and music.

Gerbert caught the eye of Pope John XIII in 970 A.D. when he traveled with Count Borrell to Rome. The pope was so impressed by Gerbert’s knowledge of math that he introduced him to Otto I the Holy Roman Emperor. From this introduction, Gerbert gained a royal commission as teacher to Prince Otto II. He would eventually also become teacher to Prince Otto III.

Later the Emperor Otto entrusted Gerbert with the leadership of the rich St. Columban of Bobbio monastery located in Italy near Piacenza. Pope Benedict VIII made Gerbert the abbot of this monastery in response. Following the death of the last Carolingian monarch King Louis V in year 987 A.D. Gerbert played a leading role in persuading the Frankish (French) nobles to choose Duke Hugh Capet to be the king of France in rivalry to the last Carolingian left the Duke Charles of Lorraine.

Thanks to the imperial patronage he enjoyed, Gerbert succeeded in being elected as the successor to Pope Gregory V in 999 A.D. As Pope Sylvester II he confirmed an old rival Arnulf in the seat of the archbishopric of Rheims. While pontiff Sylvester II energetically attacked the commonplace clergy practices of simony (selling church offices) and concubinage (marrying of priests and the clergy). Pope Sylvester II vigorously insisted that only exemplary men should occupy important leadership roles as bishops.

The year 1001 A.D. saw the people of Rome rise in revolt chasing out of the Eternal City both Pope Sylvester II and his patron the Holy Roman Emperor Otto III. They fled to Ravenna where the pope remained while the Holy Roman Emperor conducted two failed military campaigns to retake Rome. Emperor Otto III perished while on his third attempt to retake the Eternal City in 1002 A.D.

Gerbert proved to be a humanist four centuries before the Renaissance. He read literature ranging from Latin religious works to the Greek and Roman classics of Aristotle, Cicero, and Virgil. Gerbert is remembered as a leading scientist of his day.

His writings included a series on issues of the quadrivium curriculum (geometry, math, music, and astronomy). The French philosopher, teacher, and scientist turned pope also built a revolutionary organ that was powered by hydraulics using brass pipes. It was considered to be far superior to any earlier designed musical instrument.

– Born – 946 A.D. in Saint-Simon, France
– Birth Name – Gerbert of Aurillac
– Died – May 12, 1003 A.D.
– How he died
Pope Sylvester II managed a return back to Rome shortly after the death of his friend and supporter Emperor Otto III (on his third failed campaign to retake Rome). The rebelling nobility who had taken over the city continued to hold political authority though, and Pope Sylvester II died shortly after his arrival in Rome. The church buried him in the Basilica of San Giovanni at St. John Lateran in Rome.

Pope Sylvester II gained an international reputation in his day for his reorganization of dialectical and logical studies.

Before becoming pope, Sylvester II engaged in a fierce debate with an opponent Otric on the subject of the classification of knowledge that became so heated the Holy Roman Emperor Otto had to stop it.

While serving as the adviser and secretary to the first king of France Hugh Capet, Sylvester joined the struggle against the last Carolingian dynasty member Duke Charles of Lorraine.

Once elected to be the archbishop of Rheims, Sylvester II found himself enmeshed in controversies with the Holy See.