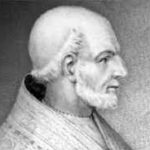 Pope Theodore I served the church as head of the papacy from years 642 A.D. through his death in 649 A.D. His ancestors were of Greek descent but lived in the Holy Land in Jerusalem. Theodore was widely admired for his generosity in helping out the poor even though the majority of his pontificate became devoted to and overshadowed by the heresy of Monothelitism (the belief that Christ only had a single will) which still flourished in the Eastern Church.

Brief History and Background on Pope Theodore I

Early Years of Pope Theodore I

Theodore I was born to a Greek father of the same name Theodore. The pontiff’s father was a bishop in Jerusalem where they lived while Theodore was growing up. When the Islamic armies conquered the Holy Lands many Syrian-based clergy fled the region and journeyed to live in Rome, including the family of Theodore I. By 640 A.D. Theodore had become a cardinal deacon. It was Pope John IV who elevated Theodore to the status of full cardinal.

Papal Election of Pope Theodore I

Thanks to his Greek heritage, the election of Theodore to the papacy gained the support of the Eastern Imperial representative in Italy the exarch of Ravenna. This official’s broad powers meant that he governed most of Italy on behalf of the Byzantine (Eastern Roman) emperor who ruled from Constantinople. Theodore I became consecrated on November 24, 642 A.D. as the successor to Pope John IV.

Pontificate of Pope Theodore I

Even though he preferred focusing on helping the poor and building churches, Pope Theodore I found his papacy consumed by an ongoing epic struggle with an Eastern heretical sect called the Monothelites who believed that Jesus Christ had only one will. Over these issues and others, Theodore I would not recognize the appointment of Patriarch Paul II in Constantinople. Pyrrhus I the predecessor to Paul had been un-canonically replaced in his office. Pope Theodore I pushed the Eastern Emperor Constans II to rescind the Ecthesis of Heraclius.

The Herculean efforts of the pope did not have the desired effect in Constantinople, but Theodore I gained great support and sympathy for his position in the West. The heretical teachings continued to be opposed by the Western Church and in the East, bishops of Africa, Palestine, and Cyprus professed their submission to the doctrine of the pontiff on the matter. The fallen Patriarch Pyrrhus of Constantinople recanted of his heretical beliefs in front of Pope Theodore but went back to them and suffered papal excommunication in 648 A.D.

Meanwhile the pope struggled in vain to bring the sitting Patriarch of Constantinople Paul II to the orthodox position of the church but he failed and excommunicated Paul afterward in 649 A.D. In Constantinople, Paul responded by harshly treating the papal nuncios and by persuading Emperor Constans to issue a decree called the Typus. According to this document of the Eastern imperial court, the issue on the doctrine of one versus two wills of Christ was no longer to be discussed. The entire Western Church condemned the Typus document including Pope Theodore’s successor Pope St. Martin I. History does not tell whether Pope Theodore I lived long enough to pronounce anathema on the Typus.

How he died
Pope Theodore I was planning a Lateran Council for 649 A.D. to officially condemn the Ecthesis and Typus but he passed away before the Western church council could be convened. Pope Martin I his successor condemned the documents. Meanwhile the Catholic Church buried Pope Theodore I in St. Peter’s Basilica in Rome.

Interesting Facts About Pope Theodore I

Pope Theodore I would not officially recognize his contemporary colleague the Patriarch Paul in Constantinople because Paul had been elected in an un-canonical procedure.

Theodore I has been remembered as a highly energetic pontiff during his seven year papacy.

Theodore was beloved by the church and is remembered to this day for being kind and generous to the poor people of the Eternal City.

Pope Theodore I proved to be a generous benefactor of the churches in Rome.

Though he was head of the Western Church as pontiff, Pope Theodore I was given a feast day in the Eastern Orthodox Church of May 18th.