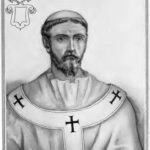 As the 159th person to hold the position of Pope, Urban II holds a significant place in Catholic history.

He played an important role in the unification of Christians across Europe and is most known for starting the crusades to capture the Holy Land.

Pope Urban II was born as Otho of Lagery. His birth name is also sometimes referred to as Otto or Odo. He was born in 1042 to a noble family close to Châtillon-sur-Marne in the Kingdom of France.

From the very beginning, Otho grew up in the Church. He was educated by the Catholic Church and quickly started his journey once he reached adulthood.

He was educated in Rheims by Bruno of Cologne. Eventually, he became canon.

History with the Catholic Church

Initially, Otho of Lagery started out as an archdeacon in Rheims. However, at the urging of Bruno, he retired as archdeacon in 1070 before he even reached the age of 30. At this point, he traveled to Cluny and entered a monastery. Eventually, he became a prior.

He was then sent to Rome by Saint Hugh at the request of Pope Gregory VII. As a monk, he assisted Pope Gregory VII in reforming the Church. Eventually, he became the pope’s chief advisor and Cardinal Bishop of Ostia in 1078. During the next 10 years, Otho represented the pope throughout France and Germany.

While he was nominated by Pope Gregory VII to be one of his successors, he was not elected as such immediately following his mentor’s death. However, he was unanimously elected after the short tenure of Pope Victor III.

Urban was born to a Châtillon-sur-Marne family and given the name Eudes (Odo).
He was prior of the Cluny abbey, and in 1080, Pope Gregory VII made him cardinal-bishop of Ostia.

As legate of the Holy Roman Empire in 1084, he was one of the most famous and aggressive promoters of the Gregorian reforms. Gregory VII nominated him as one of three papabiles (possible successors).

Desiderius, the abbot of Monte Cassino, was chosen to succeed Gregory in 1085, but after a brief reign as Victor III, Odo was elected by acclamation in Terracina in March 1088.

Otho of Lagery was officially elected for Pope on March 12, 1088. He then adopted the name Urban II. Pope Urban II’s papacy is marked by a fight for power. There were tensions among the antipope Clement III and Roman Emperor Henry IV.

Within the European territories, kings and emperors constantly battled among one another and often viewed the papacy as an afterthought. Pope Urban II sought to consolidate power, reunite Christians, and gain supreme authority.

He continued the work of Gregory VII while also striving for superiority over monarchies.

A 19th-century stained-glass showing Pope Urban II receiving St Anselm, who was exiled from England by William the Red.

Initially, this fight for power was met with little support. However, royalty throughout Europe started to form alliances with the Church in exchange for recognition by the pope. Urban II took this power and started the First Crusades.

The First Crusades were an attempt to recapture Jerusalem and unify Christians in the East and West. The enemy of these Holy Wars was Muslims. Pope Urban II managed to gain support for the First Crusades and have militaries fight for him.

Despite the violence that was being promoted by the Pope, Urban II convinced knights that the bloodshed was justified. He claimed that the Muslims were outside the Ark of Salvation, deeming the actions morally neutral.

In 1095, Pope Urban II gave a monumental speech to bishops and people of nobility at the Council of Clermont. This famous speech became somewhat of a rally cry and successfully convinced bishops to join the First Crusades.