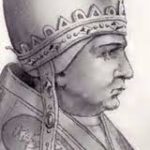 Pope Urban III was the 172nd person to hold the position and the third to adopt the “Urban” name. During his short tenure as the leader of the Catholic Church, Urban III was in a constant battle with the Holy Roman Emperor.

Urban III was born in Cuggiono, which is a small commune in Milan, Italy. He was born with the name Urberto Crivelli and was part of a relatively noble family in the region. His family was quite large and played an important role in the Church’s history well after Urberto’s death. After his childhood, Urberto studied in Bologna.

Like many future popes before him, Urberto Crivelli climbed the ranks of the Church. After decades of loyally serving the Church, he was made a cardinal in 1182. This was done by Pope Lucius III. Just a few years later in 1185, he became Archbishop of Milan.

This same year, Pope Lucius III died, calling for a vote for the new Pope. The unique thing about this election is that it was done very quickly. Archbishop Urberto Crivelli was elected the new pope the same day that his predecessor died. Crivelli adopted the name Urban III. Many scholars believe that the quick election of Urban III was done out of fear of interference from the Holy Roman Emperor, which Lucious III had a feud with.

Immediately after being elected pope, Urban III challenged the Holy Roman Emperor Frederick Barbossa. Not only did he inherit issues from his predecessor, but he harbored some feelings that were a bit more personal. Many of Urban III’s family members were condemned and harmed during a sack of Milan a couple of decades earlier. Needless to say, this didn’t bode well for the papacy.

To make matters worse, the heiress of Sicily was to be married to the Emperor’s son Henry. This created significant risks in terms of independence for the Papal States. With the marriage, the Church lost support. Urban III refused to crown Henry after the marriage, which resulted in the Emperor to call on other Church members to do so. In retaliation, Urban III excommunicated any patriarch or bishop who took part in the wedding or crowning.

Due to the tensions in the Roman Empire, Pope Urban III fled to Verona. However, Emperor Frederick Barbossa cut off all communications between Verona and the Church’s German following. As a result, Urban III attempted to excommunicate the Emperor from the Church. But, the Veronese blocked this action from taking place. In a last-ditch effort to successfully excommunicate the Emperor, the pope sought to complete his actions in Venice. He first fled to Ferrara. Before he could make it to Venice where he could carry out the threat against Emperor Frederick, he died.