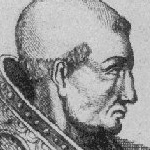 Urban IV led the Catholic Church briefly during the thirteenth century. He was the 183rd pope. Despite his short tenure in the position, Urban IV managed to leave a lasting legacy on the Church.

Before his papacy, Urban IV was known as Jacques Pantaléon. He was born to a very humble family in Troyes, Champagne, which was then a part of the Kingdom of France. Jacque was born as the son of a cobbler around 1195. Not much is known about Jaque’s childhood or what lead to his path with the Church.

Upon reaching adulthood, Jacque left Troyes to study theology and common law in Paris. After that, his career with the Church began.

History with the Catholic Church

Jacques Pantaléon served the Church in many roles. He was first a priest. Shortly thereafter, he also became a professor of canon law in Paris. Jacques quickly climbed the ranks and served as a deacon and archdeacon of Liége.

In 1245, Pantaléon was sent by Pope Innocent IV on two missions to Germany. There, he was tasked with negotiating a peace treaty between the Prussians and Teutonic Knights. At first, the peace negotiations did not lead to anything substantial. After several years of conflict, the Treaty of Christburg was signed in 1248. Even with the tensions that followed after this mission, Pantaléon became Bishop of Verdun in 1953.

Nearly three months after the death of Pope Alexander IV, Pantaléon was selected by the cardinals of the Sacred College to serve as the 183rd pope. On August 29, 1261, he adopted the name Pope Urban IV and officially began his papacy.

During his tenure as pope, Urban IV was faced with many problems. Just two weeks before he was elected, the Latin Empire of Constantinople was captured by the Byzantines. While he tried to start a crusade and retake the empire, his efforts did not gain any traction.

One of the biggest events to transpire during Pope Urban IV’s papacy was the conflict between Sicily and the Hohenstaufen Dynasty. Sicily was dominated by the German Holy Roman Empire. This domination posed a threat to the Church, as papal influence in Italy waned during Alexander IV’s reign.

Pope Urban IV worked to negotiate with Manfred. Manfred was the successor of the Hohenstaufen Dynasty and son to the late emperor Frederick II. Manfred made claims to the Sicilian throne, but Urban IV offered the throne to Charles of Anjou. Charles of Anjou was King Louis IX’s brother. Charles promised not to claim Imperial lands in northern Italy or those of in papal states, which would have helped the Church regain some control of the region.

Unfortunately, negotiations stalled. Furthermore, a pro-imperialist political movement, known as the Ghibellines, grew stronger in Italy at the same time. A string of failed promises and slow negotiations led to some tension between the parties. According to some accounts, Urban IV became suspicious that there were assassination plots against him and Charles of Anjou. As a result, he left for Perugia in Italy.

In Perugia, Pope Urban IV fell ill. He died in 1264 before Charles of Anjou, his pick for the Sicilian throne, was able to arrive in Italy.