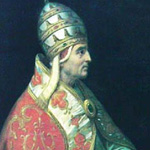 Urban V was the 200th pope of the Catholic Church. Also known as Blessed Urban V, this leader was known for his mission to bring peace to Europe.

Pope Urban V’s journey to the papacy is a unique one. He was born in the year 1310 in Languedoc, a region of the Kingdom of France. He was given the birthname of Guillaume de Grimoard and was the son of a revered knight.

In 1327, he became a Benedictine monk. He entered a monastery in Chirac, which was not far from where he grew up. Several years later, he became a priest in his very own church. Later, he began to study Canon Law in several universities across France. These include schools in Montpellier, Toulouse, Paris, and Avignon. By 1342, he earned his doctorate and began to teach. While he taught students at several schools, he was a primary professor at Montpellier.

Guillaume’s journey did not stop with his education. In 1352, he was appointed as an Abbot of Saint-Victor in Marseille. This was a prestigious monastery. The honor was bestowed by Pope Clement VI.

After his appointment, Guillaume was sent off by the pope to complete several missions. Many of these missions were in the Papal States. These diplomatic missions would gain praise from cardinals and other members of the Church.

While most popes are elected to the position after serving time as a cardinal, this was not the case with Urban V. During a papal mission to Naples, Pope Innocent VI had died. The cardinals at the time took a different approach to ensure that tensions did not affect the Church. Instead of choosing amongst themselves, the cardinals decided to go with an outsider that could reform the Church. They chose Guillaume de Grimoard because of his diplomatic experience and education.

He was officially elected on September 28, 1362. He chose to use the “Urban” name because he believed that all the previous popes were just and holy men.

During his reign as pope, Urban V was focused on bringing peace to Europe and doing good for the community. Instead of living a lavish lifestyle like some popes before him, Urban V took a more moderate approach. He followed the Benedictine Rule and chose to live a simple life. Those rules were also enforced through massive reforms throughout the Church.

Unfortunately, this didn’t gain much praise with established figures in the Catholic Church. Many of those men were used to living comfortably, so having to change their lifestyle to match this Pope’s rules was a big adjustment.

With that said, his modest approach to the papacy proved to be successful elsewhere. He founded several schools, supported students, and was very generous with the poor. He also rejected personal gain from his position, even opposing church office sales and giving rewards to his family.

During his tenure, Pope Urban V attempted to bring peace in many areas. He tried to get rid of groups that affected France and Italy. The pope even tried to bring the Papacy back to Italy. Unfortunately, the latter efforts did not succeed in the way he had hoped. His attempts at gaining power in the region failed and he was forced to move back to Avignon.

– Urban V was born in Languedoc, France, in the year 1310.
– Prior to being elected pope, he was known as Guillaume de Grimoard.
– He died on December 19, 1370, at the age of 60.
– Shortly after arriving at Avignon on September 24th, 1370, Pope Urban V fell ill. The exact cause of his illness is unknown. Urban V did not die immediately. His health deteriorated slowly and he felt his death was imminent. Before he passed, he requested that the palace be moved to his brother’s house so that he could be close to his loved ones and in a more humble setting.
– Pope Urban V was elected on September 28, 1362
– His rule ended with his death on December 19, 1370. He served as pope for a little over eight years.
– Pope Urban V was succeeded by Pope Gregory XI

– Pope Urban V was the only Avignon Pope to be beatified.
– He appointed his own brother as a cardinal. Though, he made sure that the Church acknowledged that his brother deserved the position and that he wasn’t merely doing so to reward his family.
– Despite his efforts for peace, Urban V persuaded the Holy Roman Empire to fund the Church’s religious crusades for three years.
– His Feast Day is on the same day as his death, December 19.
– He was against forced conversion or baptism. The penalty for attempts against a person’s will was excommunication.