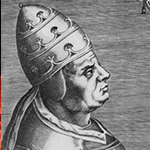 Often regarded as one of the most controversial popes in history, Pope Urban VI served as the 202nd man to hold the position. His reign was marked by the intense conflict of the Western Schism.

Before he was known as Urban VI, this pope went by Bartolomeo Prignano. He was born around 1318 in a small Italian commune called Itri. Once he reached adulthood, Bartolomeo went to Avignon for his education. There, he formed powerful relationships with other members of the Church. Eventually, he gained some power and started to climb the ranks.

In 1364, Bartolomeo became Archbishop of Acerenza, which was in the Kingom of Naples. Several years later, he was transferred to Bari by Pope Gregory XI, who had left Avignon to reestablish the papacy in Rome. Approximately nine days after the death of Gregory XI, a vote was held to elect a new pope.

This vote was riddled with controversy. Infighting between the French, Italian, and Limoges cardinals resulted in strategic votes to push their own agendas. This lead to a vote outside of the Sacred College. In the past, the papacy saw success with outsiders being elected. One of the most famous examples would be Pope Urban X, who was focused on peace.

It’s thought that the Sacred College chose Bartolomeo Prignano because the cardinals thought that he would be a safe bet. The Italian and French members might have assumed that he would be a compliant pope while the Ligomes may have been drawn to him because he was not a part of the other party. There was also pressure from the public to elect a Roman pope to keep the papacy in Rome.

On April 8, 1378, Bartolomeo Prignano was elected as the new pope, being the first Italian to be selected since the start of the Avignon Papacy. He chose to use the name, “Urban VI.”

While Urban VI was known for being pragmatic and level-headed, he quickly turned hostile. The pope became enraged with the cardinals and developed a reputation for being hot-tempered. Meanwhile, the French cardinals fled Rome in fear that they would be viewed as traitors among their colleagues in the Sacred College and the general public.

Several months later, those cardinals deemed the election to choose Urban VI as the new pope null and void. They stated that the decision was made out of fear and that he was unfit for the role. Shortly after that, they elected a new pope. This would be Clement VII.

However, the public opinion of Urban VI in Rome was still high. Many people viewed him as the one true pope. Eventually, two classes emerged. One side supported Urban VI and Rome while the other supported Clement VII and Avignon. Both figures excommunicated one another and several members of the church. This started the Western Schism, which would go on to split the Catholic Church for several decades.

– Pope Urban VI was born around the year 1318 in Iltri, Kingdom of Naples.
– He was born as Bartolomeo Prignano.
– Urban VI perished on October 15, 1389, around the age of 70.
– In 1388, Urban VI marched with thousands of troops and declared a Jubilee to raise funds. Unfortunately, he fell off his mule. He succumbed to those injuries several months later. Though, there were rumors that he died of poisoning.
– Urban VI was elected pope on April 8, 1378.
– His papacy ended with his death on October 15, 1389.

– He uncovered a plot by cardinals to arrest him. He had them arrested or tortured, depending on whether or not they confessed to their crimes.
– His sarcophagous is preserved at Saint Peter’s Basilica.
– During the restoration of Saint Peter’s Basilica, workers almost destroyed his remains. However, a church historian stopped them and ordered that they be preserved.
– Pope Urban VI created 42 cardinals during his tenure.
– His election is seen as the tipping point that started the decades-long Catholic divide in Europe.