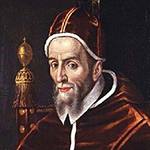 While he only held the position for a short period of time, Pope Urban VII has gone down in history as one of the most pious and generous men to hold the position. His election was highly praised due to his penchant for charity, his educational background, and years of professional service to the Church.

The seventh Pope Urban was born as Giovanni Battista Castagna on August 4, 1521. He hails from Rome and was born to a noble family. His father was a Genoese nobleman while his mother was the sister of a cardinal. His affluent upbringing led to a string of educational opportunities as an adult.

Giovanni studies in several universities across Italy. His studies were focused on civil law and canon law. He earned his doctorate degree in both fields from the University of Bologna. Shortly after that, he held numerous high-profile jobs with the Church and beyond.

The future pope went on to audit his uncle during papal legal missions in France and serve as a lawyer in the Roman Curia.

On the first of March in 1553, Giovanni was selected to become the new Archbishop of Rossano. Within that same month, he got all of the orders he needed to get officially ordained as a priest. A few years later in 1555, Giovanni was chosen by Pope Julius III to govern Fano. Pope Paul IV sent him to govern Perugia and Umbria for a short period as well.

About a decade later, Giovanni went on serve as papal nuncio in Spain. He held this position for seven years. Then, he became nuncio to Venice, served Gregory XIII as legate to Cologne, and was made Consultor of the Holy Office and the Ecclesiastical State. Giovanni Castagna was a skillful man that spent most of his life serving the Church.

Eventually, he was officially deemed a cardinal priest by Pope Gregory XIII. This lead to him becoming the Inquisitor-General of the Holy Office in 1586. Throughout the history of the Church, Giovanni Castagna was, perhaps, one of the most accomplished candidates to be considered.

When Pope Sixtus V died in 1590, Castagna was elected as the new pope by 54 cardinals. On September 15 of that year, he officially chose the pontification name of Urban VII

Pope Urban VII quickly started to serve the people after his election. Thanks to his decades of work in various positions, he possessed the administrative ability to make sweeping changes across Rome. One of his biggest accomplishments was to make a list of poor citizens in Rome. He intended to use this list to see how he could improve their lives.

Within the first few days of his tenure, he restricted spending for members of his court and subsidized bakers. He ordered the bakers to make loaves of bread and sell them under the production cost. To ensure that the bakers were not losing money, he subsidized those costs with his own personal wealth.

Overall, Urban VII was viewed as one of the most generous and honest popes in history. He was against nepotism, subsidized public projects to improve the lives of Romans, and even implemented a tobacco ban to keep the air clean.

Unfortunately, Pope Urban VII didn’t lead the Church for long. He died of illness before he could even be coronated.