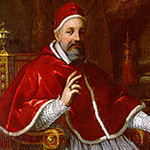 Urban VIII served as the 235th Catholic Pope. His time as the Pope came at an important time in European history. He served the position for over two decades during the Thirty Years’ War, which resulted in millions of deaths across the region. Yet, his actions as Pope have left a legacy that harmed the papacy for years after his reign.

Born on April 5, 1568, Urban VIII was given the birth name of Maffeo Barberini. He was born to an aristocratic family in Florence Italy. Maffeo’s father was a nobleman. At the age of 3, Maffeo’s father died. He went with his mother to Rome, where he looked after his uncle. Eventually, he became the heir to his uncle’s fortune.

Maffeo Barberini used that fortune to get a good education. He studied with the Society of Jesus, also known as the Jesuits. Afterward, he earned a doctorate of law from the University of Pisa.

The future pope’s uncle was an apostolic protonotary. Thanks to his uncle’s connections, he was able to secure a job from Pope Clement VIII as papal legate to King Henry IV of France.

After a few years serving as the papal legate, he became Archbishop of Nazareth. Of course, this title was only ceremonial. The Holy Land was ruled by the Turkish at the time. Throughout the next several years, Maffeo was promoted to higher ranks within the Church. Pope Clement VIII made him protonotary and nuncio to the French court. Then, Pope Paul V made him a cardinal and papal legate to Bologna.

Initially, Maffeo was not the frontrunner to be elected pope after the death of Gregory XV. In fact, some cardinals worked to prevent his election. Despite this, the cardinals chose him as the successor to Gregory XV on August 6, 1623. He then adopted the name of Urban VIII.

Urban VIII served 21 years as Pope. Thus, he did a lot for the Church and Rome as a whole. He was the last pope in history to expand the papal territory. This was done with force and Church missions. Urban VIII supported Jesuit missions in South America and China. This resulted in the expansion of the Church beyond the confines of Europe. Even today, Urban VIII’s dedication to missionary work is contributed to the grown and spread of Christianity around the world.

Even with all the good things he did for the Church, Urban VIII’s biggest legacy is the debts he incurred. He was a huge supporter of the arts. He would hire famed artists and architects to create grand projects. Pair that with his forceful use of the military and the papal debt ballooned significantly. By the year 1640, which was still several years before the end of his reign, the papal debt had increased to over 35 million scudi. This made it difficult for his successors to keep up with his influence throughout Europe.

Another notable event that transpired during his reign was the imprisonment of Galileo. Initially, Urban VIII had a good rapport with Galileo and encouraged his teachings. However, the pope was not happy with the fact that Galileo published his work as a fact rather than a hypothesis. Galileo explicitly defied the rules Urban VIII set out for publishing his work. So, he had him imprisoned.

– The eighth Pope Urban was born in Florence, Italy, on April 5, 1568.
– Prior to becoming the Catholic pope, he was known as Maffeo Barberini
– It is unclear how Pope Urban VIII dies. However, it’s believed that he died of natural causes during the War of Castros. He passed only a few months after agreeing to a peace settlement to end the war.
– Maffeo Barberini became Pope Urban VIII when his papacy started on August 6, 1623.
– The pope’s reign ended with his death on July 29, 1644.
– Pope Urban VIII was succeeded by Pope Innocent X.

– The pope issued a 1624 papal bull that banned tobacco use in holy places. It was repealed nearly a century later.
– The costs to that the city of Rome incurred due to the War of the Castros made Urban VIII very unpopular during the end of his papacy. Some citizens even destroyed a bust statue after his death.
– He was known to enrich his family through nepotism.
– Pope Urban VIII is often contributed to the massive growth of the Catholic Church over the next two hundred years.
– He composed created several scripts and original hymns that have been reprinted countless times since his death.