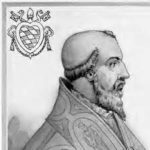 Pope Victor II served as the head of the Catholic Church and the bishop of Rome from 1055 A.D. to 1057 A.D. A man born of noble birth, Victor received appointment first as the city of Eichstätt’s bishop, then as chief adviser to the Holy Roman Emperor Henry III, and finally as successor to the papal predecessor Pope St. Leo IX. Despite Victor’s short pontificate this powerful German pope played a key role at a critical point in Holy Roman Imperial history.

Pope Victor II was born as Gebhard to the Count Hartwig of Calw in Swabia within the Holy Roman Empire (in the modern day German part of the empire). It was the Holy Roman Emperor Henry III’s own uncle who recommended Gebhard to become the Eichstätt bishop at the young age of 24. As a consistent supporter of the policies and interests of the emperor the young Gebhard finally became one of the closest confidantes of Emperor Henry III.

When Pope Leo IX died, Hildebrand (the one day Pope Gregory VII) led a delegation to Mainz in Germany. Here he petitioned Emperor Henry III to choose Gebhard as the papal successor. Henry held a court Diet (church meeting) in Ratisbon during the month of March in 1055 A.D. At this meeting Gebhard agreed to become the pope on the condition that the Holy Roman Emperor would return all lost possessions of the Holy See to the church. Henry III concurred, and Gebhard took his pontifical name of Pope Victor II. The young new pope who had assumed the papacy at only 37 years of age relocated to Rome and ascended to the papal throne in St. Peter’s Basilica on April 13, 1055 A.D.

Once the new Pope Victor II had been consecrated he traveled to meet his old patron Emperor Henry III in Florence, Italy. The pair sponsored a church council in June of the same year that condemned the practices of simony (selling church offices) and the marriage of the clergy. Victor II went on to hold other synods with the same themes in Lyon, France in 1055 A.D. and in Toulouse, France in 1056 A.D. These church conclaves witnessed the program of clerical reform expand.

That same year of 1056 A.D. saw Pope Victor II summoned to the Holy Roman Imperial court to be there for his friend Emperor Henry III’s death that occurred on October 5. Victor II was appointed to be the guardian of his old patron’s young son Henry IV and also served as the Empress Regent Agnes’ adviser. This gave the pope unprecedented power over imperial affairs. To his credit, Pope Victor II used these powers for good to help keep the peace in the Holy Roman Empire (and also to help the papacy’s position versus the barons and their aggression). The pope chose to support the Empress Regent Agnes and her followers when rivalry arose between senior clergymen like Archbishop Anno II (Cologne, Germany) and Agnes.

– Born – 1018 A.D. in the Kingdom of Germany (within the Holy Roman Empire)
– Birth Name – Gebhard of Dollnstein-Hirschberg
– Died – July 28, 1057 A.D., in Arezzo, Italy
– How he died
Victor died soon after returning to Arezzo, Italy on July 28, 1057 A.D. The 39 year old pontiff’s retinue wanted to carry his remains back to the Eichstätt Cathedral to lay him to rest in his old church, but they were assailed by citizens from Ravenna, Italy. The Ravenna citizens seized Pope Victor’s remains and instead buried him in the Church of Sta. Maria Rotunda.

Victor II served as head of the Catholic Church for only two years.

Pope Victor II was the last of the German popes.

The death of Victor II meant the abrupt end of the close working relationship between the Holy Roman Imperial Salian dynasty and the Holy See.

The remains of Pope Victor II were seized by citizens from Ravenna en route to the German cathedral where had been bishop.

Victor II was laid to rest in the same church were Theodoric the Great had been buried earlier (Church of Sta. Maria Rotunda).