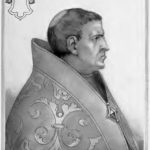 Pope Victor III was born in the principality of Benevento, Italy in 1027 A.D. This pontiff served as head of the Western church in a time of great turmoil for the papacy and during a struggle with the Holy Roman Empire. Although his papacy was eventful it lasted for under two years. Victor III twice claimed the office of the pontiff and struggled against an antipope. The Catholic Church made him a saint in 1887 A.D.

Victor III was born with the given name of Dauferio to a noble family in Benevento, Italy. After joining the Benedictine monastery in Montecassino he took the new name of Desiderius and eventually became the new abbot after succeeding Pope Stephen IX in the role in 1058 A.D.

Desiderius began a reign over Montecassino that became the golden age of the monastery. In his time as head he encouraged illumination of manuscripts and writing, began a mosaic school, and dramatically rebuilt the abbey. His reconstruction of the abbey remains a significant event in Italian architectural history to this day. Pope Nicholas II appointed Desiderius to be a cardinal priest in the year 1059 A.D. before making him the papal vicar to Southern Italy. In the role of papal vicar Desiderius succeeded in bringing a peace that had been elusive in the conflict between the papacy and the invading Normans of Southern Italy.

Pope Victor III Election and First Time in the Papacy

Pope St. Gregory VII and his cardinals preferred Desiderius to be the new pope. When Gregory died the cardinals elected Desiderius to the papacy. He refused the office in a strange turn of events, but the cardinals chose him as pope despite his refusal the following year on May 24th of 1086 A.D. Before the church could fully consecrate him as Victor III the Holy Roman Emperor Henry IV’s supporters evicted Victor from Rome. Henry IV had already chosen his own antipope Clement III independently of the church’s wishes in the year 1084 A.D. The new legitimately chosen pope Victor III returned to his stronghold at Montecassino and waited.

Pope Victor III Returns to the Office of the Pontiff

A year after his flight (in the month of March 1087 A.D.), Pope Victor made his move. He called a church synod in Capua, Italy and took back up his pontifical authority. Pope Victor III returned to St. Peter’s Church in Rome to be consecrated on the ninth of May. The antipope Clement’s backing from the Holy Roman Emperor ensured that Victor could not remain in Rome for long, and within weeks he had left.

Pope Victor III would not abandon his role as the pontiff despite the dangers lying in wait for him on all sides. He sent a papal army into Tunis (modern day Tunisia) to battle the Saracens. The victory of his army meant that the Saracens would pay tribute to the Papal States and Holy See in Rome. A few months later in August of 1087 A.D. Pope Victor convened another church synod. The Benevento synod excommunicated antipope Clement, condemned the practice of lay investiture, and banished Abbot Richard of Marseille and Archbishop Hugues of Lyon for encouraging schism in the church.

Pope Victor III was born to Prince Landulf V of Benevento as his only child.

Victor’s father was among the last of the Lombard kingdom rulers in all of Italy.

The father of Victor III died in a battle with the invading Normans of Southern Italy, allowing Victor to escape from a pre-arranged marriage by fleeing home.

The health of Pope Victor was never good, and he became ill while he was being crowned.

Pope Victor III has one surviving literary work called the “Dialogues” about the miracles of the saints at Montecassino (like Saint Benedict).

A thousand years after Pope Victor III died Pope Leo XIII made him a saint in the Catholic Church on July 23, 1887 A.D.