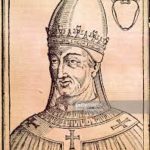 Pope Vigilius served the Western church as the Bishop of Rome and pontiff from March 29, 537 A.D. until he died. As the first pope in the Byzantine papacy, Vigilius became pope following the forced removal of his predecessor Pope Silverius. Vigilius is remembered for his significant part in the Three Chapters Controversy. The complicated theological argument that raged between Western and Eastern churches led to a Western schism that stemmed from Pope Vigilius’ policies and that raged on for another 150 years.

Vigilius was born to a Roman aristocratic family and served as a Roman deacon. He went with Pope Agapetus I on his failed mission to Constantinople in March of 536 A.D. in the attempt to stop Eastern Roman Emperor Justinian I from invading and re-conquering Italy. When Agapetus died on April 22, Vigilius schemed and plotted with the Empress Theodora to depose the new Pope Silverius who had been legitimately elected to succeed Pope Agapetus in June of 536 A.D.

Controversial Appointment to the Papacy of Pope Vigilius

According to some sources, it was the Eastern Roman General Belisarius who overthrew Silverius on the orders of Empress Theodora as Belisarius entered the Eternal City on December 9, 536 A.D. Pope Silverius went into exile and traveled to Constantinople to appeal directly to the Emperor Justinian. When Silverius came back to Rome Vigilius banished his predecessor by force. The former Pope Silverius died around the end of 537 A.D. in exile. At this point Pope Vigilius was universally acclaimed by the Western church to the papacy.

The Pontificate of Pope Vigilius

As Vigilius took the papal throne, Rome had suffered a terrible sack by the invading Ostrogoth barbarians while the Eastern Roman church had been ripped apart by the dispute between traditional orthodoxy and Monophysitism. Pope Vigilius turned his attentions to the ecclesiastical problems facing Emperor Justinian. The complex conflict surrounded acceptance of an orthodox view that the Council of Chalcedon had adopted in 451 A.D. The orthodox view argued that the human and divine natures of Jesus Christ existed together at once. Meanwhile the Monophysites on the opposing side believed that Christ was primarily divine. Justinian faced huge political issues on which side he would take as the imperial provinces of Egypt and Syria followed the Monophysite belief.

Emperor Justinian did not wait for the church council to convene before repeating his own position against the writings. Pope Vigilius reacted by cutting ties with the Eastern Emperor and was forced to take refuge in Chalcedon. Here he began censuring some of the leaders of the Eastern Church who backed Justinian. When the church council started in 553 A.D. Pope Vigilius was not present. The council confirmed the imperial position against the writings of the Three Chapters.

On May 24th of 553 A.D., Pope Vigilius issued his Resolution and would not ratify the church council verdict. Under tremendous pressure and poor treatment from Justinian and the calls of the church in Rome for the pope to return, Vigilius revoked his first Resolution and signed another one officially approving the verdict of the universal church council.

The pope now found that his key supporter (and eventual successor) papal nuncio Pelagius I had at last abandoned him. In response Pope Vigilius decided to excommunicate and imprison Pelagius.